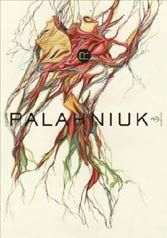 Okay, then. A father (Chester Casey) comes to the big city from rural Middletown seeking his rabies-infected son (Buster, or “Rant”) who is really just his younger self participating in a car-wrecking mania (think “Fight Club”) to get a jump on the man who raped his mother before he was born. “My head’s working overtime to swallow the mess of this,” says one character. Uh-huh.

Palahniuk is pop culture’s P.T. Barnum throttled forward 15 decades. Or a scatological Jonathan Swift with a twitch. He’s committed to ensuring a balance between modernism and his a self-styled Dark Ages that won’t see between Jesus and vomit, rabies and rubbernecking, vaginal secretion and wallpaper snot. He herds his grotesque figures (character is too strong a word) into pens and pokes at them, introducing one metaphor to upstage the one that preceded it.

Is “Rant” Casey a malignant time traveler in a corrupt police state divided between segregated day and night-dwellers or a prophetic surrogate for some man, any man eager to belong someplace, anyplace, a stand-in for insuperable alienation? “Prophets and artists,” writes Palahniuk in one of his innumerable guises (the novel is snippet-assembly of oral transmission, a Homeric yawp), “…strive with a passionate sincerity to rid themselves of the clichés associated with status incumbency and role-playing to enter into vital relations with other men in fact and imagination.”

But Palahniuk is so conscious of his faux-sibyl role that he eventually infects even parody. “What if reality is just some disease?” muses one character. And later, “Disease is the new weapon of mass destruction.” Palahniuk, as always in vehemently inventive form, wants very much to establish order, even familial peace, within an otherwise confusing, ranting world, but he carries too big a stick. “Time wraps. It loops. It stops and starts,” observes one of the car crashers. But what we mean to time (and within it) eludes even its shock-jock seer.