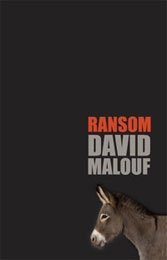 Remarkable in its simplicity, poignant in its language, reverent and moving in theme, Malouf’s Iliad imagining may well be his best work. Lovers of the ancient world know the core story. Impetuous Achilles, sulking because of a snub, returns to fight the Trojans after Hector kills his beloved Patroclus in combat. He slays Hector and mutilates his body before the eyes of his father Priam. Unable to bear the parading of his dead son, Priam decides against all advice to intervene, traveling by cart as a commoner to Achilles camp to beg for his son’s body. A ransom.

Malouf’s conceit is retelling this story in prose, focusing above all on Priam’s vantage point. Though others have done remarkable work with the Iliad — consider Christopher Logue’s many-volumed colloquial rendering — Malouf’s taming of the feral ancient is facilitated by deeper peaks at history. Patrocolus’ bond with Achilles acquires depth. Priam’s past as a slave emerges. The mules of the carter Somax, Beauty and Shock, are made tender.

Most important, Priam’s encounter with Achilles is distanced from conventional humiliations; the two men, who over time could be father and son, are conferred a brief but persuasive bond. This in turn redeems Priam’s crazy idea to fetch Hector. By seeking his son’s body and defying convention he is “a man remade,” someone who “stepped into a space that till now was uninhabited and found a way to fill it.”

Malouf’s lyrical habitation of the Iliad is equally consummate, whether he speaks of a river crossing (“Moonlight ran fast over the river of pebbles.”), of the big sounds of tented Greek troops (“The heave subsides, and the big shadows go back to being the solid bodies of men.”) or of Somax, who when he speaks to his mules intones the “dark syllables of horse magic.” It is difficult to overstate the deft heft of Malouf’s language and his command of time and place.