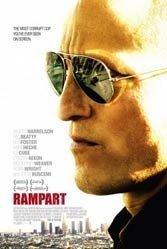 Downward spiral movies, whether they focus on bad cops or rogue soldiers, introduce central figures that can’t or won’t rein in their misguided bravado. Director Owen Moverman has his man in Officer Dave “Date Rape” Brown (Woody Harrelson), a foully medieval L.A. cop who refuses to acknowledge let alone adjust to more enlightened times. Those times are the late 1990s, specifically 1999, after a number of prominent real-life scandals revealed a police force whose worst members reveled in gratuitousness, brutality and racism.

Vietnam vet Dave, a drunk and a womanizer, is an unapologetic “I do the dirty work” figure with two ex-wives and two children (under one roof) who knows only to divide the world into good guys and bad, using his badge to establish a morality system in which he plays judge, jury, and executioner (his nickname comes from allegedly killing a date rapist). “This,” he says of police work, “is military occupation.”

But when things begin coming apart, and old school allies are reluctant to cover for his latest abuses, Dave is forced into what amount to a film-length swan dive. It’s obvious from the start there’s no water left in the pool, let alone redemptive escapes. Dave can’t even win over his daughters.

What makes the movie riveting, at least for a time, is Harrelson’s Dave, a misanthropic macho man who knows he’s sinking but can’t stop the leak. “This used to be a glorious soldiers department,” he says at the start, but the glory is now on borrowed time, which dead-end seductions, drinks, and pills can’t repair. Harrelson at times come across like a broken, poor man’s Paul Newman. But even the best spiral grows tedious after you’ve memorized its contours. Moverman and novelist James Ellroy co-wrote the script.