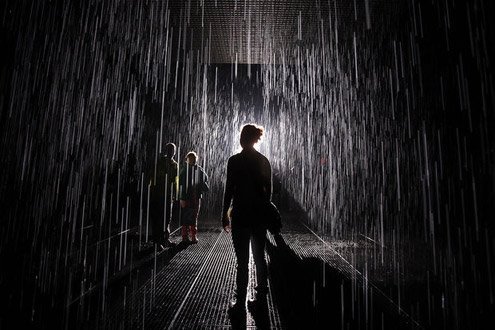 This summer's "Rain Room" installation at the Museum of Modern Art.
I

’ve been wondering lately where everyone has gone, and I’m not talking about those on summer vacations or traveling abroad. It’s simpler than that, but also more perplexing.

It started with a girlfriend who asked me if I wanted to meet with her for a picnic after work. I loved the idea and bought salad and sandwiches.

Then, a half-hour before our planned rendezvous, she cancelled via text message and said she’d call later that evening to explain why. I picnicked alone while waiting for her to call. She never did call, and I haven’t heard from her since.

Then, I reached out to an old friend for advice. He told me he’d happy to help and would be in touch the next week. Next week came and went. I followed up. “I’ll be right with you about that,” he replied. “I have some ideas for you.” It’s been over a month and I still haven’t heard from him.

Then, an old lover emailed me saying how much he missed me, and longed to see me again. The confession surprised me since he was rarely in touch. I replied by telling him how amazed I was at his affections coming out of the blue. But there was complete silence. That was six weeks ago. So much for missing me.

Knowing that all these people are still alive and well, I suspect FOMO is to blame.

I first heard the expression in regard to the Museum of Modern Art’s “Rain Room” summer exhibit. People paid $25 and waited four-to-five hours in line to experience a sense of controlling the rain (the digital installation was likened to walking through a Hollywood-style movie downpour). When visitors were asked why they’d wait hours in sweltering New York humidity for a mere 10 minutes of downpour fiction, one replied, “FOMO,” the acronym for “fear of missing out.”

In other words, so much is going on in the world that you, the 21st-century person, shouldn’t be missing it, any of it. And if you do miss it, your life is, well, not cool. You have to be doing the cool stuff, posting it on your Facebook page, and Tweeting what you see or feel to your followers. Showing off is an essential part of all this.

FOMO has another component. The fear of missing a connection to a new person, someone who might be “better” than the people you already know. Someone of influence who might advance your career, help your kid get into a better school or internship, or maybe even meet a better lover. You can’t take the chance of losing that chance. FOMO can be an addiction that drives a person to the point of constant distraction.

Consider the amount of experiential content available with a billion websites and 900,000 apps for smart phones and iPads, plus continuous Twitter feeds with thousands of people to follow. Then add the “not to be missed” trending YouTube videos, fashion shows revealing this year’s must-haves, the latest Oscar nominated movie, Tony winning play and Netflix series. Not to mention art galleries, museums, jazz concerts and music festivals. The list goes on and on.

How can a single human being (with an equally simple human need for companionship and advice) possibly compete? How can the offer of conversation over salad and sandwiches compare with experiences intended to win popularity contests?

But here’s a confession: all this supposed interacting just makes me feel alone. It seems to me, looking at the so much around me, that everyone is now everywhere, but that, somehow, that same everywhere is nowhere at all.