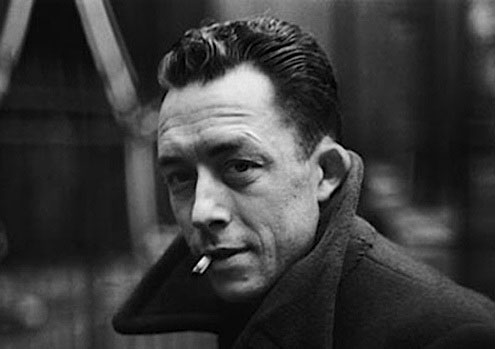 Albert Camus as photographed by Henri Cartier-Bresson.
A

lbert Camus disliked raincoats. They apparently served too specific a purpose. Among my mother’s best stories as she lay dying were about Paris in the 1950s.

It’s true that stories told in hospitals, the speaker snarled in tubes, plays to the empathy of listeners. Anecdotes distract cancer’s eagerness — for a week, for a day.

Camus often came to dinner to no. 3, Rue Rue François Premier in the eighth arrondissement, where my parents lived between 1952 and 1958. My miniature life, consisting mostly of baths and feedings, was at the time controlled by nannies living on trifling postwar incomes.

In brittle black and white snapshots all I see of myself is a hub of bulbous flesh in a tub or in a pram, my official residence when welcoming visitors into my gurgling realm. In one photograph, I’m stalled morosely under the Eiffel Tower, my father scowling above me. He peers at me as one might at an exotic vegetable that’s the wrong color. Or at a he-monster of unknown provenance. Apparently I screamed a great deal, including relentlessly on overnight trains. No one was sympathetic enough to my needs, said my mother. She presumed correctly that I would never wed. I was too impatient.

My mother escaped from Warsaw to Rome, a wartime flight, then into the marriage that — with some difficulty — led to me. A stunning, cheerful figure who hosted discreet dinner parties to help my father chat up his small circle of friends, she was at once a social director and baby-silencer.

Foremost among my father’s Paris friends was a man he referred to only as MP. I vaguely remember comments that began “MP said this,” “MP cannot believe that.” In my noisy and self-centered glory, I speculated that Mr. MP was either a father in reserve or the man who drew my baths. It annoyed me that a man that paid me no official visits would receive so much attention.

I discovered later that MP, who might in fact have actually observed me in a bath or two, was Maurice Merleau-Ponty, among Europe’s more esteemed postwar philosophers.

The elusive Camus was another matter. Camus, my mother told me, refused to arrive at the same hour as the other dinner guests, if indeed he arrived at all. She’d remind him ahead of time and he’d invariably promise not to miss dinner, “Bien sur… Yes, of course, of course I’ll be there,” but most nights he wasn’t.

Not that my father favored him. MP was far more talkative and political. The politics mattered since my father wrote for The New Republic magazine, a publication of the liberal elite that prided itself (as The Economist does now) on “selling” intelligence.

Jean-Jacques Servain Schreiber and Pierre Mendes-France (also among the Rue François 1˚ visitors) were the real keepers of France’s emerging intellectual life, the regenerators of a country undone by war, burdened with a legacy of Vichy complicity, and divided over the Algerian question.

In Egypt, Nasser threatened to create a secular Arab pan-state that would bring the West to heel. There had already been an Anglo-French-led war for control of the Suez Canal. The Soviets had H-Bombs. A Hungarian revolt had been quashed. Not at all an easy time of the world, though today’s events (visual exclamation points, all) yelp for a supreme place in the history of pre-eminence. Every tense time, like a child worried about its own primacy, yelps for top-billing.

Camus, my mother said, lost his way sometimes. Mere absent-mindedness. He was no longer a political journalist, immersed instead in novels. The matter of Algeria nagged at him for obvious reasons. Fame didn’t really become him. At the time, now-standard self-promotion, flagrant by nature, was considered tasteless.

Camus had been invited to the dinner with MP, but again the hours passed without him.

“He arrived,” my mother said, “at 10 p.m. At that point we were sitting around the table with a little cheese and red wine.”

It had been raining all evening.

Albert, she told him hours earlier, it’s raining. Remember. But Albert Camus had not remembered. He had no umbrella, no raincoat. He was soaked.

“I am so very sorry, I was distracted.”

And wet Albert, dry MP, my dour father, and several others settled in to talk by the coal fireplace.

Camus wasn’t the same as the others as the others in the circle. He tinkered from the fringes. “I am accustomed to living in the solitude of work or in the retreats of friendship,” he said in his Nobel Prize lecture.

She then wondered if she’d ever see Albert again, or Paris for that matter. I didn’t know how to answer. Nurses spoke of delirium.

But she rescued me from awkwardness. “I will take him a raincoat,” she announced. “I will do just that, take him his raincoat. In case he needs it.”

Because it can rain even on good days. Always be ready for it, she said. Always.