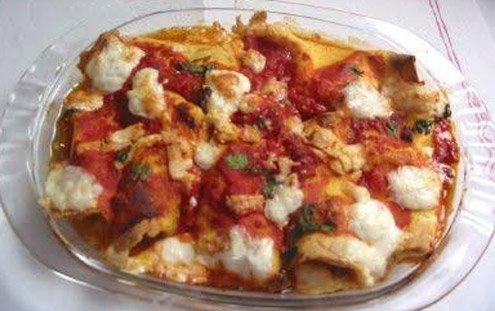 The stracci antrodocani recipe hails from the town of Antrodoco, near Rieti.
F

ood is like love. It has the magic to unite people who might otherwise have nothing in common. Making and eating meals elicits tenderness, plotting, betrayal, and all kinds of large and small decisions. I say this because the story I’m about to tell has the ingredients of a dated Italian sit-com, with food in the leading role.

It was a summer in the 1970s and I was staying with my grandmother and mother at my Aunt Lillian’s country place in the mountains. She was a widow in her 60s. Telling the difference between the roar of the cicadas and sound of the workmen replacing the roof of my aunt’s home was nearly impossible. Noises merged on those hot and blurry days.

There was nothing on TV and the temperatures were brutal enough to make you want to stay in. My only real distraction was spying on my aunt, who appeared to enjoy the presence of a man called Antonio. He was the head workman and flirted with her constantly. Antonio was the peasant type but incredibly sharp. His idea of the work at hand wasn’t just about replacing the roof but also wooing my aunt.

She took in the courtship from a distance, as only women of her age do well, encouraging him with occasional doses of devilish sarcasm. She’d brew coffee during work breaks, adding milk and mint against the heat, and sneak in a few cookies on the side. The two of them sometimes played Rummy and she’d let him win. I say “let” because my aunt was a pro at Rummy and winning was something she loved. But she insisted on remaining nonchalant about the whole thing. “Antonio’s just a friend,” she’d tell us. None of us believed her. She was clearly falling for him.

You could see it in the pleasure of her cooking and the way she’d giggle. Never mind that Antonio relentlessly serenaded her from the roof while she was out hanging the laundry, and that she’d fill in the choruses of his songs. Her heavenly meals reflected the way she felt about life at the time. My grandmother, her older sister, was also a widow. I’m honestly not sure if she was more jealous of the sudden dose of amazing food or the reason behind it.

One day, my mother and I started pressing Aunt Lillina to make her delicious stracci antrodocani, a hearty peasant recipe handed down over generations. The dish is usually made on feast days in Antrodoco, a hilly town on slopes of Monte Giano in the province of Rieti. The local recipe — rolled crêpes (cannelloni-like) stuffed with meat sauce (ragù), cheese and tomato sauce — apparently dated back to the Middle Ages. Stracci means “rags,” and the beef strips probably got the name because the recipe sees them turn moist and soft.

My aunt went about making the dish in much the same way a general commands troops. Everyone on the battlefield had an assigned task. I was in charge of getting the “rags” ready for cooking, my mother and my grandmother took care of the filling, and my aunt — the commanding officer — worked out the sauce. Making sure it all came out right was, of course, my aunt’s responsibility.

One day, after we’d finished the first part of the ritual, and everything seemed to be running smoothly, Antonio climbed down from his perch. What did he say? What else. That his mother made the best-ever stracci, and no one else could possibly do as well. After which he retreated back to roof, where he started up a new set of love melodies.

The gauntlet thrown down, my aunt, mother and grandmother took up the challenge.

My aunt, general and chef, tasted everything, adjusting the flavoring. Her goal was perfection. Her subalterns all did their parts. The result was, well, perfect. And Antonio (no surprise) was invited to lunch. He was served first and all of us stared at him as if he were a judge about to issue a sentence. His verdict? That they’d clearly been made with love. We all laughed and I eventually renamed the dish stracci dell’innamorata — “The Woman-in-Love Rags.”

— For each egg, add 1 egg-full of water (use the shell as a measure) and two tablespoons of flour. Mix the batter well to avoid lumps. Salt. Ensure the batter is liquid-like to yield thin, doughy crêpes. Bear in mind each egg is enough for about 5 small crêpes.

— Grease a pan with a dash of extra virgin olive oil. Ladle in some batter and spread it around to get a small, thin crêpe. Flip the crepe so that both sides are cooked. Follow this procedure, putting aside the finished crêpes, until you run out of batter.

— Shred the mozzarella and ham. Brown the grounds in a pan with the oil and a hint of wine. Add salt and pepper.

— On the side, prepare the ragù using the meat sauce, extra virgin olive oil, celery, carrot, onion, and tomato sauce.

— Place the sauce in middle of each crepe — a tablespoon of ground beef, mozzarella, ham, and a sprinkling of grated pecorino cheese. Wrap each crepe around itself cannelloni-style, making sure not to break it.

— Lightly grease a pan with butter and place the stracci beside each other, putting meat sauce, a few flakes of butter, and grated cheese on each one (two layers of stracci for each baking pan tray). Bake for approximately 45 minutes at 190 degrees. Serve hot.