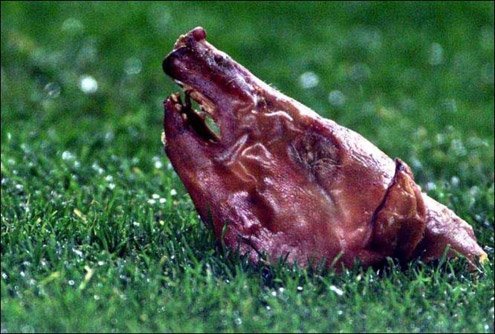 After Luis Figo moved from Barcelona to Real Madrid after five years, he got a pig's head "welcome" on a 2002 return.
L

azio fans will have enjoyed this summer more than most. Two months after winning the Derby della Storia, a 1-0 victory over city rivals A.S. Roma in the Coppa Italia final, bragging rights in the capital well and truly belong to supporters of the north Rome club.

This has been, without doubt, Lazio’s most satisfying off-season since claiming the coveted Serie A title — lo scudetto — in 2000, when it was coached by Swede Sven-Göran Eriksson. Lazio supporters might have had more reasons to celebrate had the team successfully maintained its push for Champions League qualification, but despite missing out on a place in Europe’s premier competition, most fans have no quarrel with how their team fared.

This may be indicative of the two clubs’ relative demise since the glory days of the Millennium (a Fabio Capello-coached Roma captured its own scudetto in 2001). Since then, neither side has openly challenged for league supremacy, leaving fans to dream of city bragging rights.

That, at least, is a perfectly plausible way of looking at it — not too dissimilar, I might add, to the Merseyside rivalry between once-almighty Liverpool and Everton, or the North London tussle between once-invincible Arsenal and Tottenham Hotspur. Overriding fan sentiment in both cases, depending on your allegiance, goes, “As long as we win both derbies and finish above them lot, I’ll be a happy man.”

The counter-argument (also plausible) is that derbies are genuinely crucial fixtures in a footballing calendar because they contribute significantly to a club’s identity and history. Though rivalries are very often based on geographical proximity, they’re heightened by political, social and even religious differences.

The Rome derby began as something of a socio-political context. Traditionally, Roma fans sympathized with left-wing politics and lived in the city’s “popular,” or blue collar, districts, Testaccio and Garbatella. Lazio fans, by contrast, rallied around a more right-wing stance (Mussolini favored the club), their fans often hailing from the city’s richer districts.

While discrepancies have diminished significantly in recent decades, the animosity between i romanisti and i laziali still rages. It came to a head in October 1979 with the death of Lazio fan Vincenzo Paparelli, fatally injured by a flare gun shell fired from the Curva Sud, occupied by Roma’s faithful. The incident is the basis of a highly cynical chant Roma fans, mocking his death, still sing today.

Social differences also loom large in some of the world’s other great derbies. The ferocious Istanbul derby pits aristocratic Galatasaray against Fenerbahce, the club of the people. A similarly explosive Athens derby sees noble-blooded Panathinaikos lock horns with the working-class Olympiakos. The Buenos Aires derby is also enlivened by a wealth gap: River Plate is from the aristocratic suburb of Nunez while Boca Juniors represent the far humbler La Boca neighborhood.

Spain’s El Classico between Barcelona and Real Madrid may be Europe’s most intense “political derby.” Barcelona has long represented Catalonia’s aspirations for regional autonomy and its efforts to pull away from the central control of Castile, embodied by the capital club Real Madrid. The derby assumed added political weight under the 39-year dictatorship of Francisco Franco (1936-1975), who favored Real. While Catalonia lost out in the 1930s civil war, its football team has since been able to restore regional pride by regularly defeating Madrid.

Ask the retired Luis Figo, who played for both teams, about the hatred between Barcelona and Real fans. Returning to Barcelona’s Camp Nou in 2001, after his “treasonous” transfer to Madrid’s Bernabeu, one fan threw a pig’s head towards him as he lined up a corner-kick.

In Glasgow, religious conflict underlies the deep ill-will that haunts the Old Firm derby between Celtic and Rangers. Former Celtic midfielder and now-manager Neil Lennon, a Catholic from Northern Ireland, was a reviled by Protestant Ranger fans and dogged by sectarian-motivated threats throughout his playing career. The bitter rivalry between the two teams is intensified by their proximity to one another and their Scottish Premier league duopoly — until Rangers’ recent fall from grace.

Derby days are among the rare moments when even an outsider can truly fathom the traditional values of a football club and understand the importance the game has on various societies across the globe. They show how football can unite and divide people in the most dramatic of fashions.