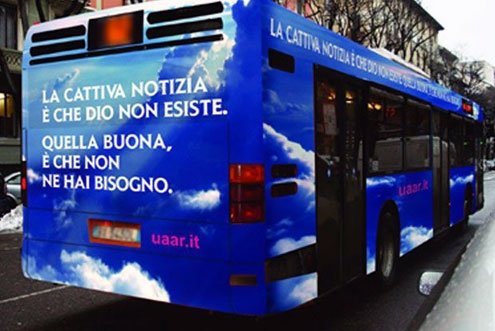 The Genoa campaign that never ran.

The Union of Rationalist Atheists and Agnostics (UAAR) is the only Italian association dedicated to the rights of the non-religious and the promotion of a secular worldview. Created in 1986, it seeks to defend the rights of non-believers and push the Italian state toward more secular practices.

Though the Lateran Treaty governing ties between Italy and the Roman Catholic Church was amended in 1984 to eliminate Catholicism as the country’s “sole” religion, teaching the faith in public schools continues, as does the honoring of Catholic holidays.

“While Italy is secular, it offers privileges to a specific religious faiths,” says Raffaele Carcano, who heads the UAAR. “There’s also an uneven media approach: TV, radio, and printed emphasize the pope’s every word, while the opinions of atheists and agnostics are given no space … or heavily stigmatized by culture.”

The UAAR stages ongoing events such as Debaptism Day (for baptized Catholics who wish to legally separate themselves from the Catholic Church) and Darwin Day (a celebration of science and reason).

The UAAR pushed for the removal of crucifixes from public classrooms, a position eventually backed by the European Court of Human Rights in Strasbourg. In November 2009, the court ruled that the presence of the crucifix in state-run schools violated the religious and educational freedom of children.

Pope Benedict XVI regularly admonishes non-believers, suggesting faithlessness represents “loss of dignity” and labeling atheists as “alienated from themselves.” British Cardinal Cormac Murphy-O’Connor, in a defamatory video since removed from YouTube, went so far as to assert “atheists are not fully human.”

Early in 2009, the UAAR decided on ad campaign calling for several Genoa city buses to carry a poster that read, “La cattiva notizia è che Dio non esiste. Quella buona è che non ne hai bisogno.” (“The bad news is that there is no God. The good news is that you don’t need one.”). The campaign was similar to one successfully promoted by secularist groups in Britain and Spain. But Cardinal Angelo Bagnasco, the Archbishop of Genoa and president of the Italian Catholic Episcopal Council, warned that the wording risked “wounding religious sensibilities.” Soon after, the ad agency that had agreed to run the campaign rescinded its approval.

The UAAR changed the slogan to read “La buona notizia è che anche Zeus non esiste. Quella cattiva, è che solo di Zeus puoi dirlo” (“The good news is that Zeus doesn’t exist. The bad news is that you can only say this about Zeus.”), but the second version was also rejected because it contained a sign-off that read: “UAAR, free not to believe in God.”

The UAAR finally returned to the original “there is no God” theme as a part of full-page ad campaign that ran in national newspapers in May. Within weeks, a Catholic group plastered parts of Rome with a poster reading “God exists, and even atheists know it.”

Carcano, co-author with Adele Orioli of Uscire dal Gregge (“Leaving the Flock”), published in 2008 by Luca Sossella Editore, spoke to Marc Di Martino. The UAAR is online in Italian.

Why should crucifixes be taken down from the walls of Italian public schools? What harm do they do?

They don’t harm anyone but they have no place in classrooms. Similarly, the symbols of political parties have no place. Public buildings are for everyone. They shouldn’t be branded with the symbols of one part of the population. The walls of public classrooms should have maps, historical charts, study materials.

How does a crucifix help students learn? If religion, as the Vatican says, is an integral part of Italian culture, it reveals itself anyway through the students’ creative outlets.

But many say the crucifix is a cultural symbol of acceptance, not discrimination.

It’s legitimate that Catholics attribute a positive meaning to their symbol. But they shouldn’t assume that non-Catholics give it the same meaning.

It’s no coincidence that the Red Cross becomes the Red Crescent in Muslim countries. [The Red Cross] has even proposed a crystal as a universal symbol that would go beyond religious differences.

The crucifix is a symbol that suggests negative events — the crusades, religious wars, the Inquisition, colonialism, and so on. There are more universal symbols out there, hearts, for example.

What’s the scope of the UAAR?

We begin with this phrase: “In a better Italy, the UAAR wouldn’t even need to exist.” If it exists, it’s because objectives reached long ago in “better” countries were not reached here, including ensuring that the rights of atheists and agnostics are respected and defended, that the secular nature of the state and its institutions is reinforced, that appreciation for non-religious modes of thought is promoted. The Italian constitution states that we are all equal, but in reality non-believers are discriminated against.

Contempt of religion is a criminal offense …

Think about citizens in provincial town who don’t want their children to attend “religion hour” at school.

Think about the atheists and agnostics whose money is funneled directly (or indirectly) to religious organizations through the infamous “8 per mille” tax [the Italian state puts .8 percent of all income tax earnings into charitable religious works].

Think about chaplains in hospitals and prisons paid for by public funding.

Think about objections to unmarried couples, living wills, and the difficulty in introducing or obtaining the RU-486 “morning-after” pill…

What is “religion hour” and how does it work?

It’s a school subject whose teachers are appointed directly by the Vatican, and paid for by the state, to teach the Catholic religion. It’s as if Marxism existed in the school curriculum and the state needed to hire Marxist teachers to ensure its teaching.

Sure, but more in theory than in practice, especially outside cities. Those who don’t participate [in the classes] become the object of a certain level of discrimination.

In your book “Leaving the Flock” you speak of the “the ecclesiastical desire to control every person in a totalitarian manner.” Can you elaborate?

From baptism to funereal rites, the Catholic faithful are called on by the Church to live their lives in accordance with the minutiae of strict religious discipline. But Catholic doctrine goes even further: its ultimate scope is the conversion and baptism of the global population. The desire for planetary belonging is a concept that even totalitarian political parties never quite embraced.

What’s the origin of current ties between Italy and the Catholic Church?

The 1929 [Lateran Pact] between the Fascist regime and the Holy See. Until then, Italy was similar to other European nations in its laity.

A long succession of Christian Democrat governments after World War II made things worse. There was a moment in the 1970s when it seemed like things might change. Laws legalizing divorce and abortion were passed. But that ended within a few years.

So-called debaptism is nothing more than the legal translation of a basic human right: the right to change religion, or have none at all. Debaptism serves (in Italy) makes for a break with the Catholic Church, and therefore the right not to be denigrated by the Church for one’s behavior.

Italian law has unfortunately recognized that, in questions of faith, the baptized are “subject” to the ecclesiastical hierarchies and must be “obedient” to them. Debaptism serves to avoid this. One can also debaptize … because one doesn’t share certain attitudes of the Church. […] Anyone can find the reason he or she prefers.

The Vatican criticizes discrimination but insists on Europe’s “Christian roots.” Isn’t this contradictory?

Clearly. The continent’s Christian roots aren’t the only ones. Think about the enormous influence of the Enlightenment. It’s a bit like when the Vatican tried to stop the Gay Pride parade by citing Rome’s “sacred” character, according to the Lateran Treaty.

If law is interpreted through Christian filters, this clearly discriminates against those who aren’t Christians.

Are the numbers of non-believers on the rise in Italy?

According to almost all available studies, they represent about a sixth of the population. That’s a significant number, which would be even higher if the social conditions favoring Catholicism didn’t exist. The major indicators of religiosity (church attendance, trust in the Church, religious weddings, and so on) all point to a downturn.

Some say atheism is just another religion. What is atheism, and what’s the view of the “new” atheists, such as Richard Dawkins and Christopher Hitchens?

Being an atheist means believing that God does not exist. Apart from this agreement, there are probably as many kinds of atheism as there are atheists.

The “new atheism” is dubbed “new” above all for it’s high-profile advocates, for the growing number of non-believers in the world, and for the rising fear religious leaders are showing in the face of it.

Generalizing is tough because those considered the knights of new atheism vary greatly in their opinions and how they express them.

Can there ever be church-state of the kind that exists in the United States? Is that even desirable in Italy?

Italy is part of the EU, and EU to me appears to be moving decisively toward increased separation. It’s difficult to say whether we’ll ever arrive at anything quite like in the U.S. or France.

If Italy existed outside of Europe it would no doubt face huge difficulties. I don’t think it would be worth such risks just to safeguard Catholic Church privileges.

Gay marriage was recently legalized in Mexico City. What about Italy?

Sooner or later, yes. That’s the direction in which the world is headed. The problem is when. Italy thinks of itself as a European nation. In reality it’s just the richest of the developing nations. The richest, but certainly not the most civil.

What are your thoughts the Swiss banning new minarets?

I don’t agree. Minarets in cities fall under private building codes, which are obviously regulated through city planning. Crucifixes in public buildings are a public matter. Freedom of conscience in private is the opposite hypothesis.

How do you interpret the Catholic Church position on evolution?

I’d like to know! It’s ambiguous. On one hand, it has clearly distanced itself from creationism, and, somewhat less clearly, from intelligent design. On the other, it considers the existence of Adam and Eve a “historical fact.”

In my view these positions betray Church’s inability to elaborate a position that reconciles scientific data with scripture and Catholic teaching.

What kind of people join the UAAR?

All kinds. As regards the norm, our members are more likely to be male college graduates living in northern cities. As for age, many are in their 40s. There are a lot of people who work with information technology.

No. We exist for those who are already atheists or agnostics, those who wish to explore their own sense of doubt. It wouldn’t be coherent for a freethinking association to send out “missionaries” of unbelief. People are perfectly capable of coming to their own conclusions.