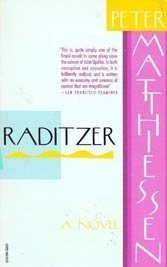 Matthieson’s overlooked but astute novel of World War II has less to do with the grungy background of its title character, a squalid, downtrodden sailor named Raditzer, than with the man he most affects, Charles Starks, a married law school graduate who could have easily slipped into a “predestined future” in his father’s Portland practice but rebelliously opted instead first for art, then marriage, and finally the Navy, hoping to make an honorable mark free of his embedded patrician background and its middle class values.

But Starks’ bad knees keep him from combat, leaving him guiltily stuck with menial work at Pearl Harbor and tied by a “strange affinity” to the relentlessly vulgar, corrupt and runt-like Raditzer, a blue collar “ambulatory bad conscience for mankind” who tries his utmost to cajole the compassionate Starks’ worst instincts — whether boozing or whoring — as if determined to prove man’s animal weakness and basic ignobility and make them “face their own frailty as represented in himself.” Raditzer’s Svengali spell leaves Starks “a small animal caught in a wire snare…”

Mattheison’s interest is in how men under stress – mostly unsupervised, their foibles unmoored – are vulnerable to personal debasement (particularly those, like Starks, who have further to fall). In that sense, the weasly Raditzer is a surrogate for Starks’ amoral side, one that’s untamed, unbidden, and violent; a one-size-fits-all metaphor for the bankruptcy of moral standing and the “infallibility of ‘good family’.” Of Starks’ entitlement, Raditzer says: “You don’t have to believe nothin you don’t want to, Charlie boy. That’s the story of your life,” a life that the doomed Raditzer humbles, defames, and also helps define.

Better known for half-a-century sprawl of frontier fiction and non-fiction Native American studies, Mattheison, among the founders of the Paris Review, greatly profits working within this far tighter framework.