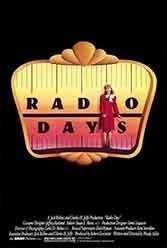 Woody Allen has lovingly engineered a slew of memory lane stories over the decades, but none may be as gently poignant as “Radio Days,” his no-frills fictional autobiography of growing up in Brooklyn of the 1930s and 40s. Allen provides the mischievous narration but it’s the Rockaway Beach family he builds that does the lion’s share of the work. Julie Kavner is the ever-complaining but compassionate Jewish mother of trickster Joe (actor Seth Green supplemented by the omniscient Allen), wife to a smart-alecky father, played by Michael Tucker, a cab driver embarrassed by his vocation who stomps around the modest house offering slapdash homegrown wisdom and all manner of paternal insight.

The Brooklyn of Allen’s embroidered recollections include cigarette girl Sally White (Mia Farrow) who sleeps her way to stardom; Dianne Weist’s Aunt Bea, who manages one ruinous date after another. There are plenty of nods to Allen’s love of radio — the 1930s were radio’s so-called Golden Age — and the quirky voice actors of the day, from which impressionable Joe creates a parallel universe (one that includes Orson Welles’ famous Martian landing broadcast).

Allen’s non-neurotic narration is itself a wonder, making the siting of a U-Boat (and pre-teen voyeurism) into acts of palpable adolescent joy. There’s no real moral to this story except perhaps what’s between the lines of a quip by Joe’s radio hero, The Masked Avenger: ” I wonder if future generations will ever even hear about us. It’s not likely. After enough time, everything passes. I don’t care how big we are or how important are our lives.”

The soundtrack also plays a leading role, featuring a wealth of up-tempo band tunes from the 30s and 40s. With the peerless 1985 “The Purple Rose of Cairo,” this is Allen’s best and kindest ode to memory.