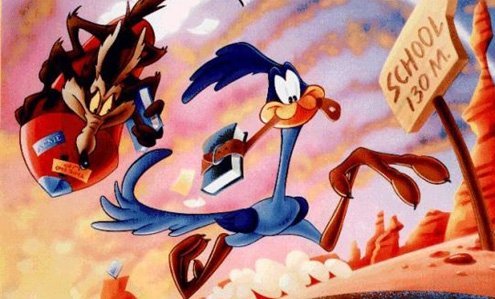 he Road Runner typically hid behind a cliff, smirking. “Meep, meep!” Meanwhile, Wilie E. Coyote assembled his latest anti-Road Runner device (from the Acme Corporation, with instructions). There was the dehydrated boulder, the portable elevator, and my all-time favorite, the earthquake pill. When the coyote fed the pills to the Road Runner nothing happed, so he took them himself. Shake, rattle and roll. After which came the small print: “Not effective on Road Runners.”

America was a funny country to me. I came from France. More specifically, I came from Paris to Saturday morning cartoons in Washington, D.C. Saturday cartoons were in fact my reason to be (or raison d’être, since English was hardly my strong suit). I lay on the living room floor like a giggling lump of clay.

Once, the coyote fired a bazooka at the Road Runner, but the shell bounced off a cliff and sizzled backwards. Guess who got burned? Hilarious.

Mirth. I remember mirth. The times were anything but perfect, and yet.

My mother became an American citizen in 1960, one year past my father’s 60th birthday. They were separated by 22 years.

The day she officially turned American (an act of bureaucratic magic), our house became a garden party, a great spillage of happy guests. They mingled beside the big apple and the smaller oak in the back yard. They clutched glasses full of Scotch (which smelled to me like glue).

It was, my father said, a mythic time, and he pointed to the red Motorola television set, cathodes humming in its tin chest. It was the young man again. The young man with the distractingly radiant smile. Pay attention! I was told, but I rarely did. My mother filled in for me. She was in love with the man with the radiant smile, which didn’t bother my father in the least. They seemed happy, a rare thing.

The times were so monumental they transported even my staid father: He took me to a parade. On a day colder than heat’s invention we stood on Pennsylvania Avenue to watch the man with the radiant smile pass in a large black car. Beside us mittened men and furry women stood on tiptoes. When he passed they made like opera singers, waving, cheer, pledging. Some cried. Tears froze. That was more than half-a-century ago.

My mother held many cocktail parties in those years. She needed guests to tell them how much she loved the United States and the man with the radiant smile. She wasn’t alone. I was annoyed by all this booming hope, which seemed silly. These people needed earthquake pills.

That was then, very much another time, which meant that the man with the radiant smile didn’t appear every second of every day. Instead, he was the backdrop, the picture frame into which my parents installed optimism’s hopeful canvas. The younger brother of the man with the radiant smile visited one of my mother’s parties and I was introduced to him. They called him a “general.” I misheard, of course. Among adults, he had the face of a kid. He was in and out of the house before I had a chance to get the Instamatic camera. Like a shy ghost.

It’s easy to think the time you live is the most exceptional of all. You just need to live in it. Certitude does the rest.

One day, mother said to me, “You should be proud that you are an American because your country brings hope to the world.” I guffawed and demanded more cartoon time.

My father, a grainy cynic who never stopped hoping, backed my mother’s line, a rare merger. The man with the radiant smile, he said, was changing American history. He spoke confidently, humorously, decisively: He was something truly new in a country that usually the word new for automobiles or appliances. I loved my father. I could see his transformation. He was refreshed. He looked forward. My mother also. And their friends.

They had the man with radiant smile and I had my cartoons: A fair trade.

When it came undone, 45 Novembers ago, I felt it immediately. The cartoons were shut down, like a house abandoned and boarded up. The smiles turned to sobs. I remember the clomping of the hoofs of the horses in the procession that carried the body of the man with the radiant smile. I remember the sullen sound of the commentators, dressed in the period’s black and white. I saw the life drain out of my parents in a way I’ve never seen since. They separated two years later.

My mother later told me she felt as if she herself had been shot. As if someone had taken hope long in the making and tossed it aside as if it lacked substance or consequence. She felt personally deprived, bereft, wounded.

My father brought up the man with the radiant smile from time to time. By then we spoke in more adult terms, father to adolescent son; by then the man I knew as the “general,” his younger brother, had also been shot dead. Hope is a luminous weight, he told me. It produces thrills among believers and envy among those who can’t bear to be moved.

Before I grew up I got back to watching the Road Runner and Wilie E. Coyote. Youth ignores the painful misadventures concocted by consenting adults. But I won’t lie: Something had changed. I saw the world in my parent’s marred reflection. The house sulked. The parties ended. I had become aware, reluctantly, that shells don’t necessarily always bounce off cliffs. Sometimes even a country can swallow earthquake pills, and unlike on TV, they change everything.