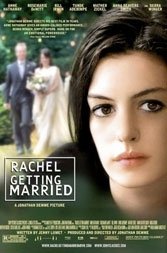 Director Jonathan Demme’s film for Generation Therapy is both wonderfully poignant and paradoxically unaffecting. A hand-held EKG of dysfunctional family dynamics, its success is also its shortcoming, since the splintering of kin, even made lyrical, matters only to confessors and participants.

The upshot is this: Kym (Anne Hathaway) is discharged from her drug rehab facility to attend the wedding of her sister Rachel (Rosemarie DeWitt) in suburban Connecticut. Her insertion into the mad chemistry of New Age pre-wedding rites — Rachel’s husband-to-be Sidney is a black musician — forces family tensions to the surface. Rachel loves Kim but can’t abide her self-indulgence. Kim is overwhelmed by the emotional swirl and is carried backward to her worst nightmare, that she was responsible for the death of the family’s young son Ethan while driving stoned.

All the talk and eclectic musical throb gradually bring sisters, and father, and former wife, into the thrall of the wedding ceremony itself, for Demme a kind of ephemerally healing Woodstock. No, Kim doesn’t get off easy, nor does the energy around her inoculate her from guilt or dread, but she is, at least at times, closer to the family whole, something of a start for a girl who looks like a broken toy soldier.

Hathaway’s performance is unequivocally splendid in a film that requires no suspension of disbelief; so are all the performances, particularly that of Bill Irwin as the father. But this slice-of-life ecumenism, which culminates in vivid vows and music to spare, doesn’t really tell a story. It’s more like a melancholy snapshot of the ebb and flow of frayed sisterhood. Kim wants to be accepted for who she is, marred but recovering; Rachel wants her wedding to be about her joy.

Though Demme meticulously puts each piece in the right place, the overall portrait is more fleeting than memorable.