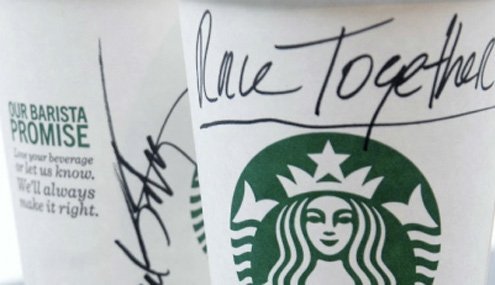 The failure of a Starbucks race relations campaign should call attention to Feltrinelli success.
I

n early March, American coffeehouse chain Starbucks launched the “Race Together” campaign. The idea was to promote discussion of racial issues among company employees and customers. Starbucks baristas were encouraged to write “Race Together” on coffee cups before handing them to patrons in a timid effort to generate reflection and debate.

But the campaign met immediate resistance. Customers and mass media questioned the appropriateness of the strategy. A ranking Starbucks executive cancelled his Twitter account after being inundated with criticism. Little more than a week after its introduction, the sign-the-cup part of “Race Together” was cancelled. Starbucks CEO Howard Schultz published an open letter to employees praising them for having taken part — “I know this hasn’t been easy for any of you,” he wrote, adding that the company would remain active in race issues.

So what went wrong?

Some answers are straightforward. You can’t ask busy baristas to engage clients in race discussions when all their contract requires them to do is to serve Frappuccino and Salted Caramel Hot Chocolate. Either you enlist them in a campaign a priori, and instruct them accordingly, or you waste their time.

More to the point, how are coffee and race linked? Why would a Starbucks customer be expected to discuss racism minutes before rushing to the office ahead of a harried day? (Slate called the campaign “amusingly ill-conceived.”)

Also, as a relatively expensive chain with stores located mainly in upscale, mono-ethnic areas, Starbucks was hardly an ideal platform for a discussion of social issues.

But it’s worth noting that an Italian bookstore chain succeeded where Starbucks failed. In 2008, publisher Giacomo Feltrinelli Editore decided to use its network of stores, La Feltrinelli, to launch the Il razzismo è una brutta storia campaign (“Racism is an nasty thing.”).

“The goal is to raise awareness in the Italian society — which today is undeniably multiethnic — about the right of citizenship, discrimination, the fight against marginalization,” says the campaign’s website, which has since evolved into an organization in its own right.

Besides featuring the catchphrase “Racism is a nasty thing,” printed on paper bags the stores used, Feltrinelli also organized related events in schools, bookshops, movie theaters, and elsewhere. “Culture is a tool for integration” was among the campaign’s battle cries.

Italians took to “Racism is a nasty thing” just as much as Americans resented “Race Together.”

A bookshop is by nature a source of culture that indirectly stimulates healthy discussion among citizens. Launching a campaign intended to raise awareness about racism made sense.

A coffee shop? Not really. While “Race Together” quickly flamed out, “Racism is an nasty thing” is now a part of Feltrinelli culture.

Before starting any campaign, a company, from leadership down, needs to ask itself the following questions:

Who am I? What values do I represent? How do people see me? What does society expect from me?

Walking into Apple Store and being told, say, that every iPhone purchase spawned a new effort to breed giant pandas in China would be a little awkward. Campaigns require a common denominator, as in common sense.

— The author is a freelance writer who has published in The Jerusalem Post, Corriere della Sera, and Times of Israel.

About the Author: Simone Somekh