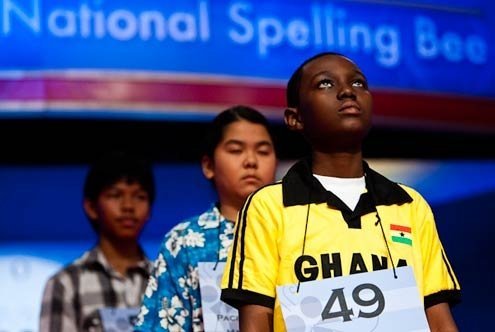 Who said it's fun?
W

hat do graduate students in language do for fun? They go to spelling bees of course. The first Tuesday of every month, rain or shine, 30 pages pending on Nietzsche vs. Palazzeschi notwithstanding, you’ll find me at Highland Kitchen in Somerville, Massachusetts.

I remember my first spelling bee in the fourth grade. It was down to Dominic Rios and me in the final round and the word was “fiery.” I spelled it “firey.” Buzz!

I was new to the elementary school, friendless, and crushed that I’d just lost in front of all of my potential playmates. Not fully understanding the rules of bees, I was surprised when Dominic spelled it wrong too and suddenly I redeemed myself. The word was “neighbor.” I spelled it correctly and won the honor of staying after school for a week to decorate the bulletin board.

Since those elementary days my love of language has increased and I’ve gotten to know French, Italian and Latin, all of which have for years been helping me out-define my mom in our Word of the Day challenge.

“Defenestrate.” My mom just shakes her head, but I’ve taught English to enough German-speaking Italians to know that the German for “window” is fenster. Defenestrate: to put something out das fenster, perhaps?

At this adult spelling bee, upon hearing the word, one can ask for the meaning, the etymology, and its use in a sentence. Based on our collective knowledge of the linguistic map and of history, I was certain that someone from our table would surely prevail over the other, more casual, spellers. We would recognize the Greek and Latin roots in the words and thus know how to spell them.

While taking the first sip of her beer a Spanish colleague asked, “So, what is a spelling bee?” What is a spelling bee? I thought to myself. How could she not know? I told her that it was an orthography quiz. An Italian TA leaned towards us to hear the explanation over the din of the pub. “What is it?” he yelled.

It shouldn’t have surprised me that spelling bees do not exist in Spain or Italy, where words are spelled as they sound. In the Italian language, every letter makes exactly one sound, unless followed by a certain letter that can change that prescribed sound. The invented word “Ghoti” is a famous representation of the irregularities of English pronunciation. If the “gh” is pronounced as in tough, the “o” as in women, the “ti” as in nation, the word becomes fish. If the “gh” is pronounced as in though, the “o” as in people, the “t” as in ballet, and the “i” as in business, the fictitious word disappears.

They called my name to the microphone. I walked up slowly, adjusted the microphone and looked expectantly to my right where the couple-in-charge sat. He held a stack of index cards and she had her hands on her sound-effect-producing keyboard. If I spelled it right, she would clang chimes. If I spelled it wrong, she would blow into a wooden kazoo. Until then she merely played little ditties.

“Raccoon,” he said. I stared out into the crowd of 50 merry drinkers and onlookers, suddenly as nervous as an unpracticed high-wire walker.

R-a-c-o-o-n, the audience heard me say, then the sound of the kazoo.