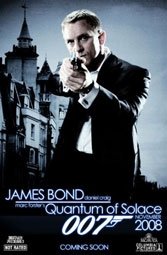 No solace here. On the contrary, inconsolable rage is all the rage. Bond (Daniel Craig) remains blue under the collar after the death of Vesper Lynd, his double-agent true love (see “Casinio Royale”). No good at anger management, he’s summoned to track new villains — who turn out to be Vespa’s protégé’s and assassins. The trail leads from Italy to Haiti to Austria to Bolivia to Russia. The bad-guy-in-chief is Dominic Greene (Mathieu Amalric), the head of amoral eco-consortium “Green Planet” (think Russian Mafia) that plays at pretending to do good while destabilizing and murdering. Then again, as a tired looking M. (Judi Dench) tells Bond, “We never really know anyone, do we?” But really we do — and it doesn’t help.

After a strong start, Craig’s sophomore effort is sophomoric and plugs scene-eating action where plot and character won’t go, which sadly is most everywhere. Director Marc Forster’s film seems at times little more than a prosaic close-out to the Lynd story. He throws in Camille (Olga Kurylenko) as a beautiful former secret agent out to kill the leering general who murdered her family. Nothing helps. Cliché makes it insufferable (“If we refused to do business with villains, we’d have no one to play with,” says the British foreign secretary).

What made Martin Cambell’s “Casino Royale” so engaging was Craig’s brooding and darkly witty interaction with Lynd (Eva Green) and Le Ciffre (Mads Mikkelsen). Here he’s betrayed by a story without an ounce of narrative passion.