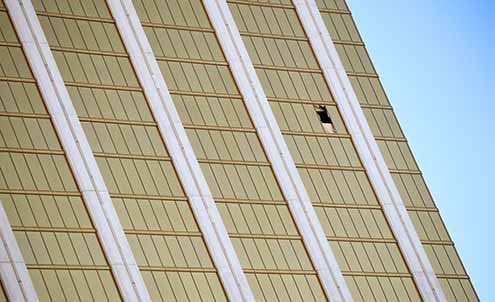 Stephen Paddock shot from on high, creating his own war zone.
W

hen I call my bank for information about an account of mine, the representative drives me crazy with a barrage of questions to confirm my identity. It’s a gamut in place to protect my financial life at the bank. It is time-consuming and at times even annoying. But on balance I’m glad the safety mechanism is in place.

The bank lets me know the call may be monitored for “quality control” purposes but the real controlling regards me — the caller.

After the slaughter in Nevada — the worst such massacre in modern U.S. history – I began watching a real time news clip of the shooting. I had to stop the minute I saw young concertgoers running for their lives while under fire. So far, the death toll stands at 58, with more than 500 wounded. What if my son had been there, my wife, a friend? Losses that would bring trauma without end, grief impossible to imagine.

Why are there not safety mechanisms regulating guns in place to protect our lives? There are traffic lights, airport security systems, car safety regulations, air traffic controllers and lifeguards at the beach.

Natural gas is odorless. Wouldn’t it be nice to keep it that way? But undetected gas can kill. So the U.S. Department of Transportation mandates that a chemical known as “mercaptan” be added to the gas to give it a distinctive rotten egg odor. It’s an alert against leaks.

Adjusting freedom to ensure a margin of safety is nothing new.

Laws governing social and personal safety, like banks checking the identity of callers, apply to everyone for good reason. You never know when a thief may be calling, a terrorist planning an attack — or when a car driver, plane pilot or swimmer could find themselves in trouble. There are studied precautions in place in most all areas of our lives to prevent or at least minimize the risk of inadvertent accident or intentional attack.

So when you look at the record of continual and ever more deadly American mass shootings and then hear that Congress has in the wings (and had before the Las Vegas shooting) a bill that would allow silencers on automatic weapons, it becomes starkly clear that something is terribly amiss.

Five years ago in this space I wrote of the isolation of those who commit mass murder. “Their actions are solitary cries for help,” I wrote in December 2012, after a gunman killed 20 children at a Connecticut school. But as forensic examination of each massacre demonstrates, the profile of mass killers has only widened. Often, nothing stands out, which is part of the problem.

The Nevada killer, 64-year-old Stephen Paddock, had no traits that a “quality control” program would have identified. He was not, on the day-to-day face of things, the mass murdering “type.” But the face of things was once again far from complete, and the consequence was unspeakable.

Trevor Noah, the South African comedian who anchors the U.S. “Daily Show” put it starkly: “People are becoming more accustomed to the news. We’re shocked, sad, [send] thoughts and prayers, then people will say, ‘Whatever you do… don’t talk about guns.'”

And yet there is only one obvious social and legal response: the creation and enactment of far stricter gun laws. It is the purest, simplest and most logical response, but, as Noah suggests, the one that still seems furthest away.