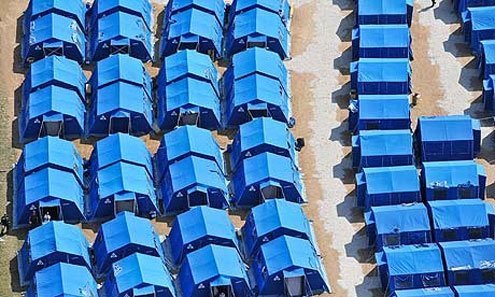 here are people who use the Bible as an oracle, opening it at random to find illumination when needed. Lately, I have found Tony Judt’s masterful study “Postwar: A History of Europe since 1945” useful this way. No matter which of its 800 pages I open, I find insight. The Greek debt crisis? The British election? Tony has the answer.

The other day he helped me understand what was wrong with the film I had seen the night before, “Draquila.” Directed by Sabina Guzzanti, an actress and television personality renowned for her Berlusconi impersonations, “Draquila” deplores the misdeeds that still martyr L’Aquila 18 months after a devastating earthquake.

Most of “Draquila” is admirable, interesting and necessary. No one should or could belittle the plight of L’Aquila’s residents or trivialize the apparent ineptitude and self-interest that has left many without homes or an adequate “sistemazione” more than a year after the disaster.

No one can deny that Prime Minister Sivio Berlusconi and Guido Bertolaso, of Italy’s Protezione Civile (Civil Protection Agency), have each used L’Aquila for both personal and political purposes.

Guzzanti’s film provides a number of telling vignettes. A tent erected by Italy’s Partito Democratico is seen through the seasons, summer, fall and winter, as it time-lapses into abandonment. L’Aquila’s abandoned and crumbling town center is filmed in apocalyptic nocturnal tints. She depicts the joy on the faces of the lucky few who, as Berlusconi promised, within a year received new quake-resistant apartments, complete with a bottle of spumante. We hear a wiretapped chat between two builders savoring the earthquake’s windfall profits.

Guzzanti notes that under Bertolaso, the civil protection agency increased its range of responsibilities and was in better position to profit, through graft, to accumulate and spend funds. In addition to putting out forest fires and coping with natural disasters, the agency used taxpayer money to organize swimming championships, papal visits and the G8 conference, which was moved from Sardinia to L’Aquila at significant expense.

Guzzanti doesn’t stop there. She takes us to Berlusconi’s bedroom to hear him talking sex with escort Patrizia d’Addario on U.S. election night. Guzzanti then introduces us to the son of Vito Ciancimino, Mafioso and former mayor of Palermo. Ciancimino junior answers the mother of all anti-Berlusconi questions: where the money for suburban Milan real estate development Milano2, Berlusconi’s first big break, came from.

This is fascinating stuff, but tells us more about the Manichean mindsets of Tony Judt’s post-war Europe than about L’Aquila. And it turns a well-intentioned piece of investigative journalism into an Italian shaggy-dog story where the answer to every question is “conspiracy.”

Thus, the decision to build earthquake-quake proof homes outside the town’s center, perhaps not unreasonable, is proof that the two Bs and their developer friends connive to replace Italy’s small-town social and architectural fabric with urban sprawl.

Likewise, civil protection’s heavy-handed curfews are a front for herding honest citizens into camps to humiliate and control them. Never mind that it might be to prevent people from returning to their dangerous homes. So complete and nefarious is the conspiracy, that it suppressed warnings of the imminent quake in the sole interest of the conspirators.

Depicting failures like those at L’Aquila as diabolic machinations so perfect and complete is risky and counterproductive to Guzzanti’s goal of political mobilization and consciousness-raising. Stretched truths play into the hands of her debunkers. Attributing L’Aquila’s difficult recovery solely to the evil tricks of shadowy higher ups only encourages ordinary Italians to excuse themselves from taking the hundreds of small and often uncomfortable stands that will eventually add up to a civil society capable of opposing Berlusconi and his mindset.

All-encompassing plot theories sap the will to fight back. They inflate the apparent size and power of the conspiracy and by extension the size and power necessary for an opposition to defeat it. When people believe all evil stems from a single system too obscure and distant to change, they stop believing they can make a difference at a local level.

This is the real damage caused by “Draquila,” not the damage to Italy’s image abroad that inspired Italian Culture Minister Sandro Bondi to boycott the Cannes Film Festival where “Draquila” debuted.

In “Post War,” Judt quotes a 1947 letter published in the Communist journal Il Politecnico. In it writer Elio Vittorini reprimanded Palmiro Togliatti, the founder of Italy’s Communist party: “Culture cannot be subordinated to politics, except at its own expense and the price of truth.”

When Guzzanti ties the messy reality of natural disaster in a neat political package, the result is neither effective journalism nor good art. But for now, it’s all we have. See “Draquila” anyway.