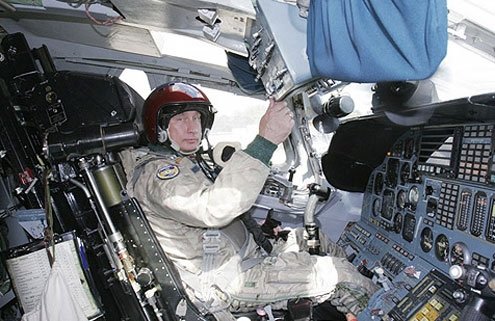 Nobody and nothing will stop Russia on the road to strengthening democracy and ensuring human rights and freedoms.
T

en years ago in September Vladimir Putin’s fortunes changed for the better. Osama bin Laden’s pandemonium sidetracked public opinion from the early stages of a sorcery that would yield democracy’s most egregious major state.

Though outwardly more palatable than China, Putin’s Russia is little more than a coiffed version of its former self, its credibility contingent on suspended disbelief among nations that require its consent or cooperation, usually in regard to weapons and energy resources.

Its legal system is a sham. A holiday downtime ruling that tacked another six years to the corruption conviction of former oil tycoon and political enemy Mikhail Khodorkovsky bore Putin’s opportunistic imprint. Prime minister in name alone, the former and possibly future Russian president is a Stroessner of the steppes, stylishly engineered to suit the urban mischief of a duplicitous century.

Putin ascended after a period of decimating economic chaos, getting Russia on a silver platter when the global limelight fell on the United States of George W. Bush. He swiftly settled scores in Chechnya and gradually hemmed in those rich enough to sponsor media dissent. He populated private companies and provincial leadership with yes-men and allies. The clumsy and biased post-Communist justice system was loosely “reformed” into a Putin fiefdom (partly explaining why his friend Italian Prime Minister Silvio Berlusconi so disdains his own judiciary, feeling he should be able to exercise similar control.)

Putin used the War on Terror period to re-install nostalgia and nationalism as the cornerstone sentiments of Russian public life, peddling a hypnotic vestige of paternalism and lost grandeur to help offset China’s more pragmatic commercial rise and revive a familiar isolationist mentality that kept an assortment of vain Soviet leaders in power for 70 years. That the blue-eyed Putin had rugged and virile looks, the antithesis of the fattened Soviet model, nurtured an illusory notion that he represented new kind of leader.

So long as everyone pledged allegiance, he’d fix the economy, restore national pride, and maintain the state welfare system, the Moscow trifecta. Mimicking the Iranian leadership, which publicly disdains drug abuse as anti-Islamic but lets stupor thrive in private, Putin cunningly dissipated criticism by resisting Soviet-style home invasions. He also encouraged the addictive thrill of purchase, a distraction — along with religion — that two thinkers named Marx and Engels fretted over in the 1840s.

Conspiracy theories were revived or revised and updated with more pertinent fibrillations. Russia was said to face U.S. and European-sponsored subversion abroad and Russia-hating terrorists in former Soviet republics. NATO-candidate Georgia was briefly invaded in 2008 while Russian security forces were given wide berth outside the rule of law in the Muslim-majority Caucuses and similar badlands where reporting is scarce or illegal. Among the wealthy, only the politically correct, particularly those who made their fortunes in the energy sector, kept their clout. Khodorkovsky and his ilk were jailed or chose to live in exile.

Though TV programming has surged, appearing to reflect the proliferation of free media, its ampleness is a myth that exists to dupe. In fact, unfettered political debate takes a back seat to variety and talk shows. The murder of anti-regime critics, while reported, has produced little investigative journalism and even less judicial follow-through. In general, public response to authority is deferential, apathetic or resigned, sometimes all three, another leftover of Soviet disenfranchisement.

Though some saw the 2008 election of Putin protégé Dmitri Medvedev as a hopeful sign, his presidential independence has been limited. Medvedev-sponsored judicial, institutional and business reforms have stalled, ostensibly as a result of the global economic downturn.

Medvedev has often behaved as more of a puppy than a puppet. On a trip to California, he toured Apple’s Cupertino plant alongside Steve Jobs, lavishing hosannas on iPods in an effort to get Russians to put their technological wherewithal to better use, or so he said.

Putin loyalists trivialize such forays, with good reason: Russia’s Web generation has no freethinking constituency. Young Russians seek purchase power, which depends on jobs, which is tied indirectly to loyalty to the regime.

Timing lent a hand. Events in Afghanistan and Iraq, at Abu Ghraib prison and Guantanamo Bay, helped Putin paper over Chechnya strong-arming and media crackdowns. They also allowed him to foster a personal orthodoxy that is part-tsarist, part-Tovarich, an imperial Soviet for the 21st century. To a public as yet unaware of social or bureaucratic fairness and traditionally inclined to lean on strong leaders, he is both lightening rod and godsend. Obsequiousness is not new to Russia. The Bolshevik Revolution was after all preceded by a dozen subjugated centuries.

After the Khodorkovsky verdict, Germany Chancellor Angela Merkl warily denounced Russia’s failure to follow up on its “repeatedly expressed intention to follow the path to a full rule of law.” The censure was pro forma. Putin’s Russia, like Berlusconi’s Italy, is a state of approximation, where repeatedly expressed intentions are actions and timetables remain vague to allow for revision, intervention and circumvention. Criticism of these plodding, morally corrupt methods produces immediate isolationist counter-criticism directed at outside meddling.

Three months before September 11, Bush met Putin for the first time and announced he’d gotten “a sense of his soul,” which he described as “very straightforward and trustworthy.” Churchill apparently liked Stalin’s smile on first viewing, but managed to also point out that crocodiles, when they open their mouths, can seem positively mirthful.