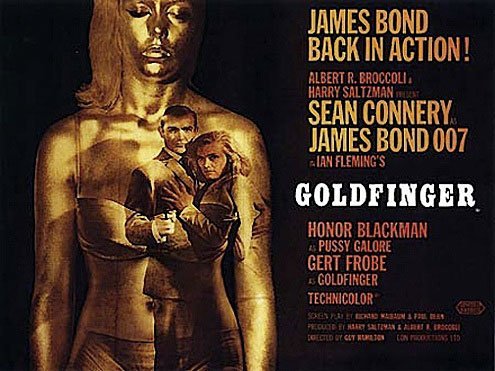 Pussy Galore was James Bond’s cat. All this sounded, rather suddenly, like a horror film.
C

ome on, said my father, it’s time to be an adult.

How do we do that? I yowled, fearing another trick (I’d been hauled to the opera after the Kennedy inauguration, a sinister event labeled harmlessly as “a presentation.”)

I’m taking you to see James Pond, he announced.

The way he huffed at the syllables, like at birthday candles — AH-PROH-PREE-AT — made me resolve to discuss the invitation with Petie, the neighborhood expert on adults.

Dad, I informed him casually, feigning boredom, wants to take me to see … James Pond.

OK, he said, I’ll tell you, but then you can’t tell anyone.

Petie had a golden cowlick and red-rimmed glasses with loopy lenses and made me shake the secret handshake, which he’d borrowed from Russian spies. It involved bumping knuckles. We bumped knuckles.

Goldfinger is, well, a cat …

A cat, I interrupted. My father was taking me to see a movie about a cat?

OK. My father was taking me to see an adult film about a big cat. I immediately feared the worst: opera.

Rarely did I question Petie’s authority. I mean, he knew about witches and Russians and tree houses in general. He even sometimes spoke to girls.

But it was time for the question, one asked rarely: How do you know?

Petie rolled his eyes. EVERYBODY knew. I was, said Petie, probably the only person in the universe who didn’t.

Everybody knew what? I wailed back.

But maybe that was it!

Maybe my father was trying to make me an adult by taking me to a great new horror movie. I had already seen “Village of the Damned,” which frightened me witless. Now, he was taking me to see one about a scalding race of giant cats.

If Pussy Galore was the cat, I asked Petie, what was Goldfinger? Who was Pond?

He was stuck with explaining the obvious to the only person in the universe who didn’t understand the celluloid genesis of big adult cats.

James Bond is like, well, a normal dad who gets a cat. It’s a Galore cat, which is a kind of gold cat they have in … India. It has magic powers, like spies. Its secret name is Goldfinger. He, Bond, and Goldfinger live in a house together until girls come in and… spoil it all.

That was it. That was the movie.

I summarized: my father was taking me to see a movie about a dad named Pond who gets a cat from India, names it Goldfinger, and is chased out by girls?

That’s why your dad wants to take you. It’s a trick.

We did go to the movie, my father and I. We waited in a long line two blocks from the White House. The theater was called the RKO Keith’s.

Do you know what this is about? he asked me before it began.

In a matter of speaking, he said.

The rest, quite memorably, belonged to Mr. Bond.