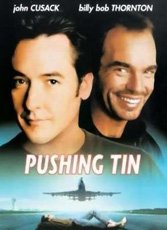 Out of the blue, a smart and sassy sleeper about the life and times of New York air traffic controllers. That “Four Weddings and a Funeral” and “Donnie Brasco” director Mike Newell would be the guiding light behind this little gem is no surprise: He’s always navigated deftly between satire and drama. But this is about as un-British as it gets — more so even than the Pacino/Depp-taunt “Brasco” — freeing Newell to take all sorts of silly, bittersweet chances.

John Cusack is Nick Falzone, a hotshot Italo-American Alpha-male controller who rules his roost and is happily married to Connie (Cate Blanchett, in arch Long Island guise). Enter Zen cowboy Russell Bell (Billy Bob Thornton), a half-Choctaw Indian and reformed alcoholic who gets his kicks daring 747s to crush him (“he’s a half-breed,” says boss Pete, “he doesn’t fit in either world.”) In tow is wife Mary (Angelina Jolie, then Thornton’s partner, and it shows).

Nick and Russell play off one another for “office” supremacy, with both doing their idiosyncratic share of sexual one-upmanship (yes, wives are up for grabs). But Newell won’t surrender the movie’s heart of gold, which keeps the escalating male rivalry clear of darkness.

Any director that manages to get Blanchett, Jolie, Thornton and Cusack together in a rendition of “Muskrat Love” deserves some kind of prize. (Newell filmed this two years before 9/11; nothing of its kind will ever be made again.)