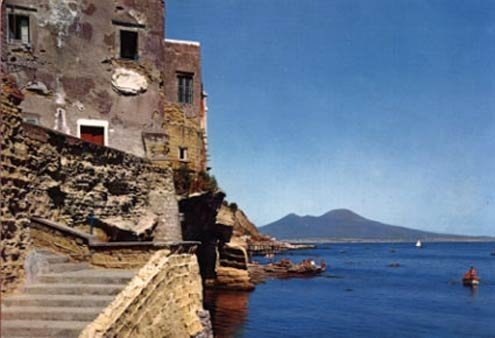 The hamlet of Marechiaro, in Naples' Posillipo district.
I

t’s summer in Naples, and that means everyone around me is getting conspicuously tanned. The question on everyone’s lips is, “When are you going to the sea?” (“Quando vai al mare?”)

I’ve played this game before in the Naples sun and lost. But this year is different. I’ve figured out just how often I need to reapply sunblock against sun poisoning (about once every hour or two) and I’m ready to hit the beach.

Beach appeal was once lost on me, but I recently had a breakthrough. During a weekend getaway on the nearby island of Ischia, I promptly forgot my well-laid tourist itinerary (castles and gardens) and instead spent three days enjoying the shoreline and thermal spas. That’s what I call progress.

Emerging from unscathed (i.e., unburned) emboldened me. Add a gentle nudge from the heat, which has hovered above 90 degrees Fahrenheit for the past several weeks, and I’m ready to join my Italian neighbors on the water.

In the past month, I’ve often found myself in the Naples seafront hamlet of Marechiaro. Here, Neapolitan individualism is on full display, usually tucked into a tight Speedo. In the 1950s and 1960s, Hollywood stars flocked here to get away from Rome.

The district is full of fishermen, as well as residents who swim over to individual rocks to splay out beneath the sun. On a popular outcropping, a small stand sells water and fruit. Further out, fishermen collect mussels in large plastic buckets. If you approach them in a boat or kayak, they may offer you some to eat raw.

I can’t get enough of this place, perhaps because it strikes me as so Neapolitan. On a recent visit, I was trying to figure out how to get to a beach bar located across the water (apparently, you have to swim) when I ran into a group of fisherman who offered to take me out on their boat for a small fee.

I said yes, mostly for the opportunity to snap photos of nearby rocks and buildings along the shore. In return, I got a close-up view of the bond Neapolitans have with the Mediterranean.

There’s something ruggedly personal about how people here decide to claim a rock and lay there, often for hours. You can watch teenage couples lying in each other’s arms near a discarded canoe. Elsewhere, men take turns swimming and harvesting mussels.

Amid the splashing and swimming is Neapolitan legend and romance. Above the small fishing boats and sunbathers is the window that inspired the famous Neapolitan song, “Marechiare” (dialect for Marechiaro, which means “clearwater.”) In 1885, writer Salvatore Di Giacomo saw a carnation in the window and conjured up a romantic poem starring a woman called Caroline (Quanno spónta a’ luna a Marechiare, pure li pisce nce fanno a ll’ammore/”When the moon comes out over Marechiare, even the fish make love.”) Nineteenth-century composer Francesco Paolo Tosti later set the poem to music, and it became a classic Neapolitan love song.

Whether Di Giacomo actually visited Marechiaro before writing his beloved poem remains a matter of some debate. Yet a window fitting the song’s description can still be seen today, complete with a stucco decoration to identify it and a carnation poised eternally on the windowsill.

Marechiaro reminds me how special Naples is. Here, the people don’t just go to the sea in August; they live off it year round, as the fishermen attest. What’s more, from May to September, Neapolitans from all walks of life can come here to stake out their own little rock, and maybe find peace.