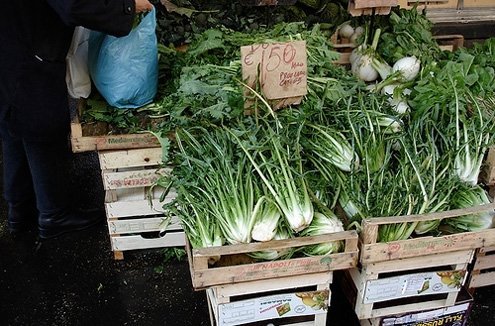 ne of my favorite pastimes in Italy is to trawl the open markets for unfamiliar ingredients. During a stay in Rome’s Testaccio neighborhood, I discovered the strange and spiky winter vegetable, puntarelle.

My Roman flatmate, Daniele, came into the kitchen one day to find me contemplating a jar of acciughe (anchovies) and a bag of already cut-and-curled puntarelle, which, in Rome, is served as salad. Daniele quickly took over. The dressing, made with finely chopped anchovies, olive oil, some garlic, and either vinegar or lemon juice, softens the bitterness of the puntarelle in such a way that you are left with a salad that’s crisp, refreshing, and flavorful: the anchovy and bitter greens are intense and delicate at the same time.

Daniele beamed as I relished the last bite of his salad; it was, after all, a distinctly Roman dish. I explained to him that I’d never run across it in the States, so he promised me, with a hint of sympathy when he saw the love-struck look in my eye, “We can make it again sometime.”

A few days later, Daniele invited me to his friend’s house for dinner. And, soon after, a whole head of puntarelle appeared in the fridge. On the morning of the dinner, I found him in the kitchen. The dinner party, he said, had grown from three to ten guests, and the head of punterelle he’d bought was not going to be enough — could I buy more?

That afternoon, I shopped with the air of certainty and discernment of a local, but inside I was delighted to have been appointed to the task. In the market, vendors perched on small stools, a knife in one hand, a head of punterelle in the other. The vegetable, which tastes a bit like a cross between endive and arugula, is quite beautiful with its tough exterior of serrated, pointy leaves and soft underbelly of thick, hollow, white shoots; it is more striking than — though not unlike — a head of chicory. First you slice the leaves and shoots lengthwise, in such a way that they are thick enough to have substance and crunch, but thin enough to snap into a curl when thrown into a bowl of cold lemon water. Shoppers happily pay up to four times the price of an uncut punterelle avoid the labor. I bought a whole head; combined with what Daniele had already bought, I felt confident we’d have enough for ten or more dinner guests.

Somewhere around nine that evening, we arrived at the dinner, bearing some homemade pesto for the trofie, a bottle of wine, and our two heads of punterelle, to which the hostess gave a suspicious sidelong glance. Left alone, I overheard a few words of protest, albeit subdued, from the kitchen. Then I heard Daniele explaining, perhaps placating, and the puntarelle heads were placed on the dining room table with a cutting board, a large bowl of water, and several paring knives. I flashed back to the vendor at the market, hunched over his stool, slicing the shoots with the patience and expertise of a master whittler, and I looked around. I didn’t think I should make the first move, given that I was a foreigner and had only recently discovered the dish. Then again, the other guests weren’t exactly diving in. They were, however, examining the setup with amusement and raised eyebrows.

Daniele explained (the first I’d heard) that this was for me, the Americana, that I had fallen in love with puntarelle, and that I should have the experience of doing it the right way.

It was nearing ten o’clock. People were getting a little cranky. An American couple who’d flown in the night before, and whose faces had taken on the ashen pallor of jet lag, were smiling in a way that suggested they were trying to turn this into an experience, a particularly Italian experience.

I blushed and sank slightly lower in my seat.

Two other women — friends of Daniele — who clearly felt an obligation to rescue him from his sweet, if fairly insane, gesture rolled up their sleeves. The least I could do was help.

We slid the edges of our knives carefully down the sides of the shoots, but something was awry. The spears were coming out too thin and misshapen, and disagreement was erupting over whether they were supposed to curl immediately upon submersion in the bowl of chilled lemon water, or within several hours. Toward eleven, with the pasta prepared and a few more guests just arriving, one of my fellow puntarelle slicers stood up and snapped open her cell phone. She was calling her mother.

The three of us, along with the patient, jet-lagged guests, watched as she paced and listened on the phone. The prognosis didn’t look good. After hanging up, she came back to the table and looked, for a moment, at her feet. What had been said in all that discussion?

Finally, she spoke. “It’s a disaster. My mother said we should just give up.”

Perhaps it was my hunger, my exhaustion, or my desire not to be ungrateful, but I laughed. It was actually more a combination of a gasp and a cry. While I could appreciate that our salad looked nothing like the finely curled and delicate spears sold at the market, it had been an experience designed for me, my puntarelle lesson, and I was satisfied with what we’d created.

I stood up with resolve and hand-tossed our hard-earned and haphazard spears, which never did actually curl. “This is great!” I announced, and almost instantly everyone brightened. Since when has love ever been perfect anyway?