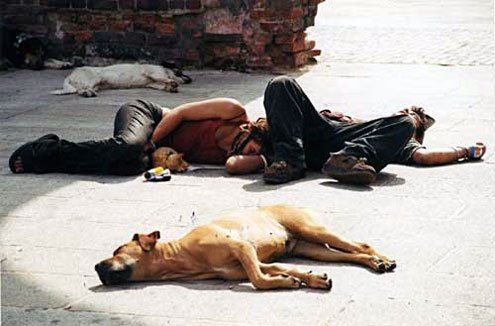 Why so much homeless chic?
I

used to think that the punkabbestia — dubiously dubbed “gutter punk” in English — were an Italian phenomenon. Strolling across Ponte Sisto, one of Rome’s most attractive old bridges, I would lament their occupation of the bridge (occupation is the perfect word in many ways) and its subsequent transformation into a kennel.

They were everywhere in Rome, and if one asked you for a euro and you didn’t hand it over, the first word to slip past the pierced lower lip was nearly always stronzo, or Fascist (at least ideologically). To not support their cause — inasmuch as there was one —was to be the automatic enemy, the political other, the bourgeois-Fascist so despised by the radical European left.

(Note: If Wikipedia is to be believed, there is even a debate over the etymology of the term punkabbestia, basically over whether or not the “bestia” in question is a reference to their pets or just some Tuscan slang meaning “superpunk.” There is nothing really punk about them, however, in the sense that I or anyone who has ever read Lester Bangs understands as “punk.” There isn’t even the slightest intellectual pretense about these punks, and Sontagism was key to the original formation of what became punk in the mid-70s. I bet none of these ardent young radicals has ever read “Notes on Camp,” or even Rimbaud.)

Rather, the punkabbestia resembled the Deadheads, an aesthetic relic of something that lost its sense long ago, a throwback to some vague, perpetual revolution that never was more than a flash in the pan of popular culture.

I think what bothered me most about them, however, wasn’t their self-inflicted griminess or even their rottener-than-thou snottitude. I was a retro-punk once, too. I understood that stuff, and I understood that most healthy people grow out of it after the brief flirt fizzles out. Even Johnny Rotten became John Lydon again within a year of the Sex Pistols’ first — and only — album.

What bothered me most about them were their dogs: starved, lactating and working on shabbos. Animals without which nobody would fork over a thin dime to these angry street youths, all of who probably had families and a clean pillow on which to lay their heads. They may have been slumming, but their animals were suffering acute humiliation and degradation. Where were the animal rights activists on Ponte Sisto?

The truth is that, after six years, they had become as much a part of my Roman landscape as the Pantheon. I hardly even noticed them anymore. Until I went to Spain, that is.

The Spanish city of Granada, in Andalusia, is heavy punkabbestia stomping ground. In fact, it’s difficult to enjoy the delights of the Albayzin — Granada’s historic Moorish quarter facing the Alhambra — without running into hoards of dreadlocked street musicians plucking out chords for change. The plazas after dark are strewn with groups huddled together on the pavement, their dogs humping and whining. You have to step over them, as if they were cadavers after a massacre. The graffiti is so thick that my wife quipped, “I feel like we’re in the Bronx.”

One Moroccan restaurateur told us that he is moving his restaurant to another part of the city because he has lost most of his business. He said that the tourist board of Granada tells the city’s visitors that the Albayzin is dangerous. “No one wants to come through here at night. The restaurants are all suffering.” The punkabbestia have taken over.

Even our trusty guidebook had this to say about the caves of Sacromonte, near the Albayzin: “…a few [Gypsies] still live here, as do a number of cave-squatters whose bohemian lifestyle is legendary in the city. The zone is now UNESCO protected…and law requires that all caves must be fit to live in.”

Does this mean that the squatters and their “bohemian lifestyle” are actually protected by law? No wonder they proliferate. I remember reading, back in the mid-1990s, of the squatter wars on New York’s Lower East Side. The city was trying very hard to root them out of the old tenements that they had turned into illegal outposts, complete with water and electricity that no one was willing to pay for. Today, in Granada, they are state-funded.

Don’t get me wrong, I don’t mean to suggest these good-natured young people should be rooted out of our beautiful European cities. But I do question the sagacity of such laissez-faire. There is real homelessness in the world, so why bend over backwards to accommodate such homeless-chic? Does the choice to live like a bum really constitute an “alternative lifestyle?”

If they wish for independence, they should know it has a price tag. If you want your freedom, you must pay for it. Most of us work and pay rent (or a mutuo), which isn’t exactly an illustrious lifestyle by punkabbestia standards. Nobody will hire you with piercings covering most available lobes and orifices, and unwashed hair grown knotty with time. But those are the breaks, kids. You can’t live off free beer forever.

The sobering conclusion is that this is, at the very least, a pan-European phenomenon. Many of us are quick to blame Italy as a kind of “capital of the Third World,” but for all I know similar phenomena exist in far-away places like Japan and Israel. A recent film, “Someone to Run With,” opens a window on Jerusalem’s punkabbestia subculture. We may not like them much, but they are here to stay. I just wish someone would take care of their dogs.