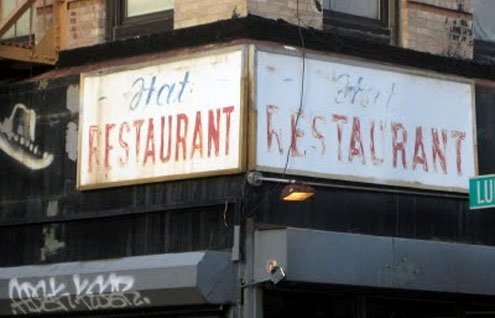 Long nights on Ludlow Street...
I

had a great and turbulent time in New York, from the moment my mother kissed me goodbye in front of a Bowery hotel when I was 20 to my last meal eight years later in a Flatbush Chinese restaurant. I rented eight apartments, held three jobs, spent seven months on the dole, fought two court cases (I won both), and survived two relationships. You can only live like that in your twenties, and I did.

My first week in the city I wandered up to the East Village and browsed the used record shops. In those days, music came before books. I nursed the dream of fronting a band, playing CBGB and living on refried beans until I was famous enough to buy a flat on Central Park West. I even bid for and got a job at the Strand, the infamous bookstore on Broadway and 12th Street, because I’d read somewhere that Patti Smith had worked there before she became, well, Patti Smith. If I’d read that she’d worked at Balducci’s I probably would’ve pestered them. Such was the power of punk lore over my neophyte imagination.

While at the Strand I embraced a progressively more degenerate lifestyle. It was a heady place to work, despite the fact that they treated their employees like garbage. The Strand myth was that they would hire anyone: “struggling artists,” squatters, junkies. And they did. In fact, the place was crawling with vice. In the employee lounge — where rats scurried across the concrete floor from time to time — the refrigerator was always chock-full of malt liquor and beer. The management either drank as heavily as we did or looked the other way.

We’d go out and get hammered at the bars on First Avenue for lunch, then as soon as six o’clock rolled around we were back at our favorite watering hole on Avenue B for more. Far eastside bars still had sawdust on the floor and killer jukeboxes. We drank pitchers of McSoreley’s Ale, an East Village specialty, and bopped our sodden heads to Iggy and the Stooges. We’d stumble home to Greenpoint, stopping off at the all-night bodega for a few tall cans of Ballantine and cigarettes.

Around that time I began having severe bowel trouble. My steady diet of ephedrine, Twinkies and Yoo-hoo probably didn’t help. I recall squatting in the public toilet at the Strand munching on alfalfa sprouts, hoping for the best. It certainly didn’t occur to me at the time that ephedrine — which was my over-the-counter answer to shooting speed, something I wouldn’t have had the guts to do anyway — was calcifying my innards. My bad diet did the rest.

A couple of times a year my mom and step-dad would drive up from Maryland to visit. They’d bring me things like old furniture from our basement; crates of used albums and boxes packed with macaroni and cheese and canned salmon (why not tuna, I always wondered?). Then they’d take me, their emaciated son, out for a decent meal at Katz’s or the Second Avenue Deli. Hungry as I was, I’d crunch away at the bowl of sour pickles, slurp down the matzo ball soup and take the uneaten half of my corned beef sandwich home in a napkin. Once my mother even made me try kishke, which was delicious.

With my sister, we visited the Tenement Museum together on Orchard Street. There we found a photo of an original tenants who looked exactly like our mother. I’d take them on rollicking subway rides. I once even took them to the bar where I hung out. I think I wanted to show them my world, let them in on some deep secret about who I had become. Instead, all I managed to do was alienate them. After that, they visited less and less frequently.

On Monday nights I’d schlep down to the Ludlow St. Cafe with my guitar for open mic night. I’d order a pitcher of beer, put my name on the list, and slump down over a barstool to work up my courage. When they called my name I’d stagger up to the stage, plug in my faux-Rickenbacker hollow body to the amp, and start in on Dylan’s “Visions of Johanna.” The changes were simple and I knew all the words; besides, it was my favorite song. How could the public not love it?

Maybe it was my tendency to end every performance in a loud feedback roar a là Sonic Youth, or just the fact that I couldn’t sing and had absolutely no interest in my audience, but on my final night they pulled the plug on me. I kept playing before I realized no sound was coming out of the amplifiers. When it dawned on me, I slunk back to my barstool and ordered another pitcher.

And there died the first of my great New York dreams.