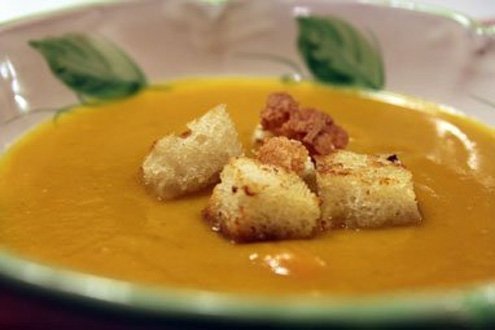 Don't underestimate the power of pumpkin soup.
I

was stuck at home with a sore throat. I couldn’t swallow much more than cold soup. Bless my mother, who stopped by to say hello on a sunny day. I wasn’t running a fever so we decided to take a walk to nearby St. Peter’s. I wanted to check out a new all-organic food market in Borgo Pio run by a north Rome store called La Capra Rampante, “The Rearing Goat.” We latched my daughter into her stroller and I forgot my aches and pains.

I like these walks for lots of reasons but little things stand out. For example, how my daughter and mother look alike. Genetics is a strange and wondrous thing. So is figuring out what keeps people healthy. My parents just got their annual lab results back and they’re both fine. Call me typically Italian, but I’m convinced a lot of it has to do with food. My mother’s always been a great cook. She and my father still shop locally. They live near the shore and buy from a fishmonger. When it comes to health, God is in details.

St. Peter’s is packed. It’s Ash Wednesday. Worse still, police have blocked off the square. It’s probably a terror alert. We’re directed to walk outside the colonnade and circle around to where the store is, on Borgo Pio. Tourists are everywhere. A vendor sells hot and crunchy foccaccia brimming with mortadella and some of the tourists have decided he’s serving their first and last supper. They line up in the coffee- and pizza-flavored breeze. The smells are irresistible.

I have a coffee with my mother outside the market. My daughter’s fast asleep, probably lulled into it by the gentle bumping of the stroller over the cobblestones. She didn’t see the police or the crowds. From her it’s just another sunny day.

I’m suddenly more relaxed. It’s the sun, the hot croissants, the dense, creamy coffee, and the smell of roasted almonds — plus the fact that the crowds and the police are out of the picture.

My mother remembers that as a kid one of her aunts took her near to where we are now, to a latteria, or milk shop, where they served hot foccaccia you’d dip into your cappuccino. She loved going so much she made her mother write down the next time her aunt would be coming around. My mother does much the same with our son now, taking him out on walks near our apartment. The two of them sit down and she sips her caffè macchiato while he (feet hardly touching the ground) dips his croissant into frothy milk.

She says all this proudly, but I already know all about it. Whenever I take my son out on walks, the local shop owners call him by name. He’s also become obsessed with frothy milk and croissants. I recently took him to the bar where he and my mother go and the barman asked him when he was coming back with the pretty lady. “Pretty lady, hear that?” I tell my mother. She shoots back a mischievous grin.

Once inside La Capra Rampante, I head for the fruits and vegetable section where I pick up a pumpkin from Mantua and some Piacenza garlic, both IGP certified. Pumpkin is a nutritious but overlooked vegetable. It fits into all kinds of recipes, including soups, ravioli, and risottos. Insiders say Piacenza garlic has the best aroma of all. My mother settles on some handmade raw flour (“Wait until you taste my next pizza!”).

I’m not through, though. I get some all-natural vegetable-based and orange scented laundry soap (you can get it for a euro). I also pick up some cocoa oil, which comes in handy for all sorts of things (we mix it with sodium bicarbonate for toothpaste; websites explains how). A store with goat in its name is obviously has goat’s milk. There’s yogurt, cheese, and an assortment of goat products.

Back at home my mother makes pumpkin soup (my throat thanks her). Just as I’m mulling over a nearly perfect day I see breaking news about drunken Dutch hooligans run amok in the center of Rome. They’re here for a soccer match. They’ve even managed to vandalize the Bernini boat statue — the Barcaccia — at the foot of the Spanish Steps. I suddenly think back to the security at St. Peter’s and wonder how Rome police can possibly deal with terrorist threats if can’t even stop a few hundred drunk and stoned hooligans. My mood sours.

Not for long. Irony is Italy’s great survival mechanism. And Italians are very good at it, at survival, that is. My guess is that if terrorists overran Rome they’d face the same problems everyone else here does, traffic, one-way streets, and potholes. Potholes even derailed James Bond recently. Daniel Craig, who plays 007, actually had to go back to London after hurting his head when his Aston Martin hit a huge pothole during a high-speed chase scene for the next Bond movie, “Spectre.”

“Visiting” terrorists would also have to deal with the strategically situated dog turds. As for traffic, terrorist cells would be stuck for days at a time (Note to terrorists: when planning an attack, give yourself ample time and factor in strikes. Also avoid public transportation).

Just what Rome still has left to destroy is another story. Italian politicians have been the country’s own best terrorists over the centuries. The damage shows. Then again, maybe the terrorists could actually help out, seeing as so many Italians are ditching the country, desperate to work just about anywhere else. That said, they’d certainly love my mother’s pumpkin soup. Maybe they’d even lighten up.

Pumpkin soup with potatoes and leek

— Wash, peel and dice the potatoes; peel and slice the leeks. Also dice the pumpkin and coarsely chop the slice of speck.

— Peel the garlic and brown it a saucepan with the olive oil. Remove the garlic and cook the vegetables in the same oil for 5 minutes. Now, pour in the broth (warmed). From the moment it starts boiling, cook over medium heat for about 30 minutes, stirring the mix regularly.

— On the side, slice the bread and toast the slices for 3 minutes.

— When the soup is ready, turn off the burner and season with salt, ground black pepper and a generous sprinkling of nutmeg. Then add the parsley.

— Pour the soup into bowls and add slivers of bread, which you’ve sprinkled with thick slices of grated Pecorino. Serve very hot. Chardonnay or Pinot Noir are fine accompaniment, but do not serve to terrorists.