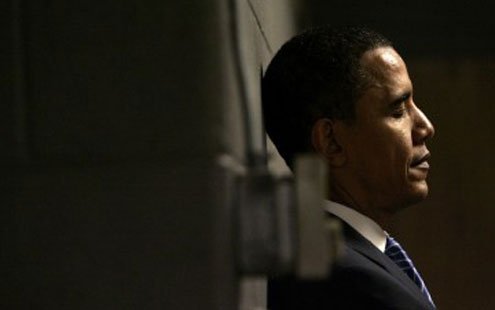 n Cold War 1963, a youthful John Kennedy brought out goose bumps in West Berlin with four well-chosen words in German: “Ich bin ein Berliner” (“I am a citizen of Berlin.”) All could borrow from his romantic defiance of the Soviet Union, which had just completed the Berlin Wall. He embodied the future.

No so for Barack Obama, whose linguistic excursions in Indonesia received trifling mention from a global media syndicate drunk on confrontation.

Speaking to students at the University of Jakarta, Obama, who lived in Indonesia as a boy, produced his own Berlin. “Pulang kampung, nih,” he told the students in slang — “I’m back in the village.”

It was a rare example of a U.S. president acknowledging non-American roots to constructive ends. The Indonesian students responded in much the same way as hundreds of thousands of cheering Berliners in another era.

The New York Times, which endorsed Obama but has since faddishly joined bandwagons of back-peddlers, reported the events dully: “Obama easily won over an audience of 6,500 mostly young Indonesians by recalling the years he spent here as a boy and skillfully using several Indonesian expressions.” It later summed up the Indonesia stop as a “sentimental homecoming,” reserving most of its attention to a G-20 summit in South Korea (“The glow has worn off…” and “Mr. Obama seemed to stumble in Seoul…” were favorite bromides.)

The public and private engineers of Obama’s personal recessions are determined to ensure a once-overflowing cup conform at all times to the half-empty. Indonesia was a heartbreaking stop on that self-defeating via crucis.

No, Muslim Jakarta of 2010 isn’t anti-Communist West Berlin of 1963. Yes, the American economic scene is rough. Of course, Obama is running rapids that may yet overturn his once-promising political legacy.

But when an American president in the post-Bush era visits a Muslim country to spontaneous applause, Indonesia shouldn’t stand alone in hailing the progress of a favorite son. For globalization to possess a credible cultural exterior unrelated to commerce “Pulang kampung, nih” should do better than “sentimental homecoming.”

It does not, alas, and fear of strangeness is still responsible.

“Pulang kampung, nih” is neither Christian nor Catholic (Irish-rooted JFK was both). Speaking in tongues only piques a widespread parochialism that is still buffeted by racial, ethnic and religious bias, some of it expressed in roundabout ways.

A president who cavorts in Jakarta does Western sensibilities no favors. Indonesia is after all a minor league representative of a new eastern economic order that is helping to generate massive shifts in international immigration patterns and religious preferences.

Chancellor Angela Merkl said as much a month ago in openly admitting the failure of postwar German multiculturalism: “We kidded ourselves a while, we said: ‘They won’t stay, sometime they will be gone,’ but this isn’t reality.”

Like it or not, the global reality is closer to “Pulang kampung, nih.” Merkl knows this.

To rescue the secular (and the state), France has outlawed Islamic dress in public. Balancing the slate, Italy has removed Catholic crucifixes from schools. But the state-religion cocktail has no one 21st-century taste. Foreignness varies by degrees. Integration remains voluble.

In parts of the United States, Obama’s sentences sounded like Satanic verses. The persistent debate about Obama’s past continues putting a ginger spin on the extraction of positives from anything foreign.

So does Obama’s humbling candor. “We are a very large, very wealthy, very powerful country,” he said in Seoul. “We have had outsized influence over world affairs for a century now. And you are now seeing a situation in which a whole host of other countries are doing very well and coming into their own, and naturally they are going to be more assertive in terms of their interests and ideas. And that’s a healthy thing.”

Healthy only for ecumenical realists. In truth, a global village can’t be seen as existing when slivers of its unifying text, spoken by a U.S. president, are dismissed as background noise.

Beware suspicion and an emphasis on differences, Obama said in Indonesia, reiterating a theme of his presidency. His antidote, as always, was his person, his presence, a mutt-style merging of culture and language that could be quintessentially American if Americans would only pledge to it outside election cycles. “Indonesia bagian dari diri saya [Indonesia is part of me],” he told the students, and they loved him for it.

But that’s not the norm. The man who can briefly feel at home in Jakarta is finding it hard to feel similarly in his own house. The mutt-love that brought Obama to the White House has yielded the baton to the more homegrown familiarity of restlessness and resentment. Both of which can do without Indonesian.