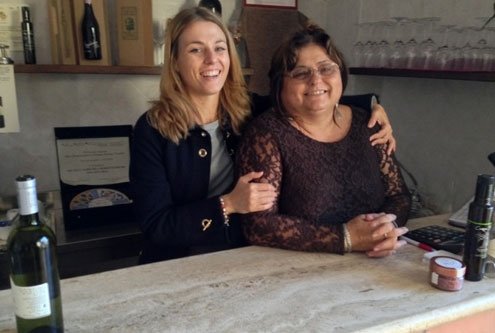 ontefalco is a medieval Umbrian hill town south of Perugia that is home to Italy’s most tannic wine, Sagrantino. The tannic acid in the skin of the grapes gives reds their puckering power.

I visited four producers — the small Sagrantino di Montefalco consortium has only 26 members — specifically choosing those that don’t rein in the naturally wild tannins and rustic flavors that give Sagrantino wines their personality and authenticity.

All four make their own versions of Sagrantino Secco DOCG, which requires at least eight years in the cellar and pairing with a hearty meal, and Sagrantino Passito DOCG, a vino di meditazione(a stand-alone wine) best with strong cheese or crusty desserts. They also make Rosso di Montefalco DOC (60-70% Sangiovese; 10-15% Sagrantino), which can be drunk younger and with lighter food.

Here’s a list of the flagship Sagrantino Secco I tasted at each winery, along with alcohol levels and prices.

The small cantina of the Azienda Agricola di Francesco Botti is located under the home of its owners, Francesco and Maila Botti. The Colle del Saraceno name refers to the 13th-century reign of Palermo-born Fredrick II, who as Holy Roman Emperor once passed through here with his Saracen entourage.

Francesco Botti’s vineyards face south on a sun-drenched pietra alta, or high rock, at an altitude of 450 meters. Six years ago, he halved production to increase quality. “When you taste my wine, I hope the only thing you smell is the grapes,” says Francesco, a man of few words. He uses no chemicals in the vineyard or the cellar, only native yeasts. His certified organic wine is not filtered.

Paolo Bea of Antica Azienda Agricola Paolo Bea is among the founders of Vini Veri (Real Wines), a naturalist wine group. Sadly, this year, Bea lost his entire production to the peronospera fungus, a devastating and unprecedented event.

Bea and his wife Marina incorporated the winery in 1973, but their family has been making wine on family land for 500 years. Sons Gianpiero and Giuseppe now manage many aspects of the business, but the day I was there I found Paolo hard at work.

I did my tasting in the old cellar, once a stall for animals located under the house. His wines are layered in character and complexity, as are the handwritten labels that change with each vintage.

The Azienda Agricola Omero Moretti is located under its namesake’s house, just down the hill from a picturesque village called Giano dell’Umbria. Each of Omero’s labels contains a quotation from the Odyssey — Omero is Homer in Italian.

Omero is quiet and reserved man who tends to focus on his wine and olive oil. Daughter Giusy, full of energy and ideas, showed me the family cellar, where fermentation was under way, and walked me through Vigna Lunga, the main south facing vineyard that overlooks Montefalco. Daniela, Omero’s wife, used the family’s “Best in Umbria 2012” organic olive oil to make me bruschetta as I tasted their fabulous certified organic wines. Since they’d sold out their 2008 vintage months earlier, I got a sneak preview of the 2009: full of flavor and personality.

In the 1960s, Milziade Antano of Fattoria il Colleallodole: Milziade Antano in Bevagna, north of Montefalco, decided to make his wine by hand — not entirely organic, but with minimal use of chemicals.

The operation is now in the hands of Milziade’s forty-something son, Francesco, who could have passed for a biker if he’d been wearing a leather vest and bandana. But he remains very much a vintner. “I was born to do this work,” he told me.

He poured me his wine in his old cantina, also located under his house (a new one has just been completed next door), his approach reflecting that of so many of the people I’d met along the way. “I don’t tell fairy tales. I just make good wine and let that stand on its own.”