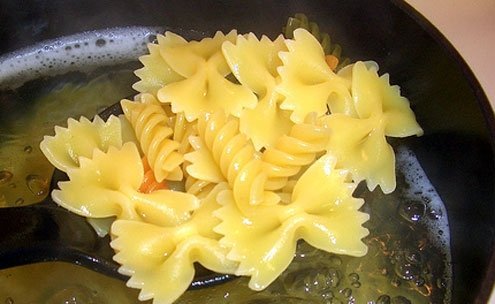 ost agree that pasta tastes better in Italy. But it doesn’t have to be that way. Pasta recipes written in English can derail a cook from the outset. One commonly advised cooking step — it usually reads “drain pasta and set aside” — can be a recipe’s undoing. Following it creates two major problems: first, you lose the water the pasta was cooked in; second, the pasta hardens before it comes in contact with the sauce. Both influence the way pasta and sauce come together… more on that later.

I recently made one of the simplest pastas imaginable, farfalle con Parmigiano e pepe bianco — bowtie pasta with Parmesan cheese and white pepper. It was incredibly tasty thanks to great ingredients and following a few fundamental pasta-making principles.

For quite some time I’ve known the pasta basics. What I didn’t know were reasons behind the steps, the “whys.” I decided to make the rounds of the kitchen to get some answers to “obvious” questions.

Why salt the water?

Every Italian will tell you that pasta water needs to be as salty as the sea. According to my roommate, pasta tastes terrible if the water isn’t salted. Period.

Friend and mentor Chef Antonio took time out to elaborate. He also agreed that salted water was essential. But what about adding salt after the fact? I asked. Not the same thing, he replied. Putting salt in the water allows the pasta to absorb the salt, rather than merely being coated by it. Salting the pasta via the water also means not having to salt the sauce as much, if at all. This explains why salt is rarely present on Italian restaurant tables.

Why stir pasta immediately when tossed into boiling water?

Both my roommate and chef Antonio instantly gave the same answer. Fail to stir and individual pieces can fuse. But that didn’t entirely satisfy me. A quick Google search added science to the mix.

Why not drain pasta using a colander?

As mentioned at the outset, draining also means tossing out the pasta water, which has a great starchy flavor that should be added to sauces in lieu of plain water. If you let the pasta dry or coat it with oil or butter before combining it with your sauce, it’s less likely to absorb the sauce itself, instead retaining the oil or butter coating.

This is an important consideration when the time comes to combine pasta and sauce. Pasta is generally cooked a minute or two before the designated time on the box, which is when it should go into the the waiting saucepan. Next comes several minutes of pan-stirring with the heat on low. This allows the pasta to absorb some of sauce. Flavors combine.

While the pasta and sauce cook in the pan, be sure to add a little bit of the pasta water to keep everything nice and liquid.

For my pasta dish I was lucky enough to get olive oil from chef Antonio, whose family produces about 200 such bottles a year for personal use and hyper-local distribution. It’s some if the best olive oil I have tasted. My friend Melissa, fresh from a trip to Istanbul, brought back some white pepper corns and a pepper grinder.

White and black pepper emerge from the same seed, though black pepper is harvested when the seeds are green and not yet ripe. Sun drying gives them their color. But if left to mature, the seeds turn white. While white pepper has the same flavor, it’s generally a little milder and subtler.

The recipe below tastes great with or without pepper. They key is adding an ample amount of cheese that will then melt into the pasta water, making it beautifully creamy, or bello cremoso, as chef Antonio likes to say.