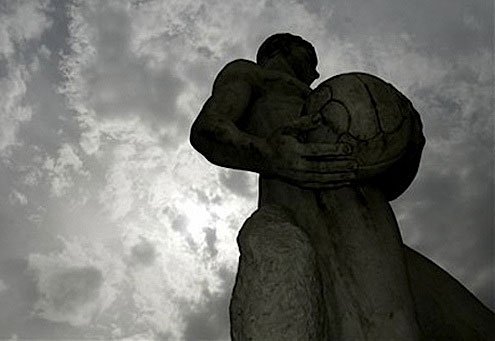 The humbling of the Italian game will cost tens of millions of euro and take the sheen off the country’s recent World Cup triumph.
S

pectacular judgment is a spectator sport. Big tribunals invite vicarious participation. The accused, the judged, and the convicted are thrilling to behold. In societies where summary punishment has largely disappeared, thwarting the powerful under rule of law is about as cinematic as civil order gets.

When one of the demoted teams is the most decorated in national history, Juventus — long envied and associated with favoritism — the stakes rise.

When another under siege is AC Milan, owned by former Prime Minister Silvio Berlusconi, a man seemingly above law, they rise even further: Milan was not demoted but heavily penalized.

All this, in essence, because powerful soccer executives (led by Juventus’ Luciano Moggi) colluded with fawning referees in an attempt to rig the outcome of two dozen games over three years, perhaps more. The sports tribunal’s decision has already induced praise and derision. Appeals are coming but are likely to fail.

How Italy fits into this frenzy, and whether the event is purifying or vindictive, or both, is less straightforward.

The last time the country confronted a scandal on this scale was in the early 1990s when a group of Milan prosecutors produced evidence of graft and bribery that destroyed Italy’s two major parties, the Socialists and the Christian Democrats.

Then as now the public applauded. The so-called “Mani Puliti,” Clean Hands, prosecutors made Italy look good by dismantling a longstanding power structure long considered corrupt. The country had a modern look.

But the modern carries a briefcase full of history.

What most rankled Italians was not the corruption of the parties as such but that certain parties seemed to control corruption’s success rate — they were arrogantly above the non-law, so to speak. Clean Hands leveled the field and ushered in the next generation of opportunists.

Most soccer fans are thrilled at Moggi’s humbling. Why? Too clever for his own good, they said; behold the to and fro eyes of haughtiness. A former train conductor (class plays an unspoken role), he rose to establishment boss status, a viciously amoral executive in a sport bedeviled with sums of money often beyond the gross — second only to the amounts politicians covet and dispense.

This politically opaque side of soccer, rich and clandestine, enraged fans, particularly those outside Turin and Milan. They became convinced that Juventus and Milan used their ample cash reserves and national popularity to purchase fine players and control referees. Questionable calls on the field upped the ante.

While the sports court confirmed their suspicions, it also added the Lazio of Rome (its old ownership gutted by business corruption) and Fiorentina to the mix. Owned by designer Diego della Valle, Fiorentina recently clawed its way back into the soccer elite after its old ownership mismanaged it down several rungs. Now, it must start over.

In an online poll conducted by the sports daily Gazzetta dello Sport, more than 10,000 readers cheered the sentences but were disappointed that Milan was not more severely penalized, suspecting Berlusconi’s orchestral maneuvers in the dark.

For now at least, the scandal is more about punishment (vendetta to the street-wise) than reform. As with Clean Hands, it gratifies those who’ve made a 20-year espresso conversation out of soccer conspiracies centered in Turin. When law vindicates public opinion, law is good.

Just how good it really is, or was — wiretap contents were leaked — is a story for another time. Some evidence used in this case would have been tossed out of court as tainted in the United States or the UK.

Clean Hands taught a lesson. Absent the excitement of a public hunt for criminals and scapegoats, unreformed Italy reverts to business as usual. That means the rule of individual shrewdness with a premium placed on those who know to glide around obstacles. Berlusconi neutralized efforts to infringe on his power base by lashing out: he was persecuted, he said. That a persecuted man could get so far attracted supporters.

While Italian soccer has ostensibly unsullied itself by exiling insiders and punishing their teams it has merely dented arrogance — the same message Clean Hands sent 15 years ago to little effect.

Meanwhile, the diminishing of the Italian game will cost tens of millions of euro and take the sheen off the country’s recent World Cup triumph. Television contracts will be resized; some will collapse.

Italy lives for such drama, so not all is lost. Humbling the mighty is its own story line because it opens new ones: the temporary rise of the small soldier ahead of the redemption of the mighty. The world is that way, a vat of concentric and repetitious story lines — witness the Middle East — played out over the course of a lifetime.

Did Italian politics wash its hands after the Milan magistrates cleaned up? No. Its spoiled goods were replaced by mediocre leftists and Silvio Berlusconi, in that order. Will Italian soccer reform its ways as a result of the verdicts? It will change, yes. Reform, however, is a word Italians love the sound of but often can’t see for the trees.

Christopher P. Winner’s email address is cpwinner@theamericanmag.com. If you speak Italian, feel free to play Moggiopoli, a Monopoly-style game coined by the sports daily Gazzetta dello Sport to give Italians a sense of the breadth of the scandal. See gazzetta.it/Speciali/2006/moggiopoli