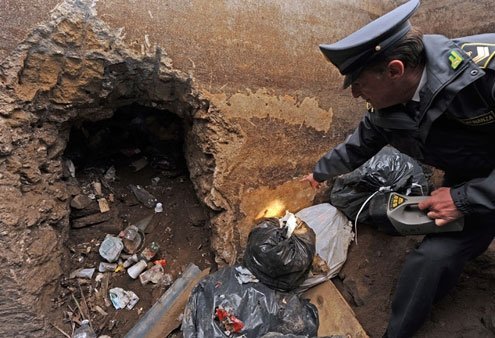 irst-time visitors to Rome are exposed to more than beauty, graffiti, and ruins. They are also come into intimate contact with ancient art, most of which is open to close inspection, and as a result to damage.

Take the Roman Forum. On a 2007 visit, I wandered through the Coliseum side (now exit-only), stepping over rubble, peeking under the Arch of Titus, and gawking at the Temple of Vesta — all for free, not a custodian in sight.

You now have to fork over €12 to visit the space that was public for 2,500 years. There are tickets, railings, and guards. Despite additional services and revenue, ancient columns lie around haphazardly, mostly serving as stumbling blocks or seating for tens of thousands of tourists. Intact statues are left uncovered, vulnerable to bad weather, car exhaust, and acid rain.

City ruins of varying importance are similarly defenseless. The aqueducts in Parco degli Aquedotti may provide shade for morning runners, but they’re also a favorite Rome ground and toilet for walked dogs. Statues of the powerful demigods Castor and Pollux are helpless before modern pollution as the huge chunks of fourth-century BC wall that merge into the Termini train station.

Even the Vatican’s majestic Raphael Rooms seem strangely devoid of oversight. The exposed lower part of the frescoes is wide open. Toss a jacket over the railing and it can brush up against the paint. Anyone wanting harm the art could do so in a second.

Even the most well-meaning and careful visitors can cause inadvertent damage. Summer in the packed Stanza della Signatura produces moist heat that arises from sweaty bodies, loosening Raphael’s delicate work wall-work. The lines of Euclid’s tunic are blurred; so is the expression on Plato’s face.

That art can be experienced up close is part of Rome’s charm. Authenticity brings rich history to life. Without it, the Forum would be no more than a Disney park. It’s stirring to have a fresco or a statue close at hand. It’s not like Florence, where Michelangelo’s David was long ago whisked away to the Accademia, a replica trotted out to Piazza della Signoria.

But there are consequences.

The Coliseum is due for a €25 million restoration, a price-tag so steep the Italian government has struck a sponsorship deal with the Tod’s shoe company. The project has yet to begin. Sections of the third-century Aurelian Wall collapse every few years because of water infiltration, weeds, and pollution. Despite a controversial 20-year restoration that ended in time for the Holy Year 2000, the Sistine Chapel is already said to be due for yet another cleaning — no surprise since it hosts some four million visitors annually.

Then there’s Michelangelo’s Pieta, which zealot Laszlo Toth slammed 15 times with a hammer in 1972. Several minutes passed before anyone stopped him. The Madonna’s nose was cleaved, her eyelid gouged, her left arm broken at the elbow, the fingers snapped.

Today, thick glass protects the sculpture, at the same time making it impossible to see the Madonna’s woeful expression or pick out Michelangelo’s signature in her sash. Dozens of reflecting flashbulbs make viewing that much more difficult. By contrast, other precious St. Peter’s sculptures, including Bernini’s St. Longinus and Arnolfo di Cambio’s 13th-century St. Peter, remain in the open. How to protect and preserve these pieces without replacing them with knockoffs is a modern conundrum.

But it could be worse.

While in Paris with a friend, we met a Frenchman who until recently e had worked at the Versailles Palace. Too bad he’d left, he told us, since he could have given us a secret tour.

Night had nothing to do with it. “Everyone who has the keys to Versailles brings their friends there at night to party and hang out,” he told us, shrugging.

We were incredulous. Insiders could bring their friends into Versailles when it was closed? Yes, he nodded. “It’s absolutely fine. Actually, Versailles doesn’t even have a security system.”

Now we were laughing.

“Well,” said my friend, “I guess you must have great insurance!”

“No, no,” he replied quickly. “Versailles doesn’t have any insurance. Nobody will insure it, because it costs too much. But it’s okay, because there are lots of people there all the time, and everyone has the keys.”

I suggested that maybe a security system and fewer secret visitors might help with insurance.

At least I hope not.