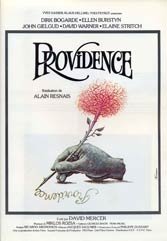 Bedridden writer Clive Langham (John Gielgud) has crossed the line from aging into dying. The Chablis-guzzling Clive, deeply resentful of his successful younger children, conjures up a book plot fantasy world in which his family members are his mental marionettes in scenarios borrowed wildly from Virginia Woolf, film noir, pop fiction, and B-movie horror flicks.

Only a dad hell-bent on nastiness would give his lawyer son (Dirk Bogarde) a Mustang convertible with a funereal pallor or make his youngest into a werewolf. Stylishly wrapped in crimson silk pajamas and a peacock robe that could out-dazzle Camille, Clive weaves and warps his progeny into twisted situations. He bats them about, resuscitates them, before taking another cynical whack and making them utter lines like “violence reeks of spontaneity.”

When the “real” characters are introduced for his 78th birthday, his manor house resembles an Edward Hopper painting jolted into life. Musings on mercy killing, suicide, and free will spewing from a lesser actor than Gielgud or directed with less wit than Frenchman Alain Resnais’s would risk black hole implosion. But dark humor keeps the whole aloft. Painted landscapes punch up the fantasy, with Yves St. Laurent 1970s fashions adding to the panache.