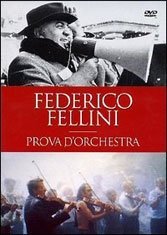 Exasperated by the politics of film funding and the difficulties of living in disruptive, strike-addled Italy, Fellini struck back with metaphor and morality play. An orchestra assembles to rehearse a piece in a medieval chapel. A union representative tells the gossipy musicians that they’re being filmed for television but won’t get a bonus. Bickering and plotting immediately break out. Musicians honor their own instruments by demeaning those of others.

In comes the pompous German conductor (Baldiun Bass), Fellini’s mock instiller of order. He brays and cajoles but soon realizes he has before him not an orchestra but an Italian microcosm: People disparaging of discipline determined to do things their own way. During a union-mandated break, the TV crew focuses on the aloof and aristocratic conductor, who mourns the passing obedience and authority; he’s the scene’s situational Fascist, as well as its perfectionist.

By the time he returns to the podium, the musician are in full revolt. Political slogans break out. Union leaders gesticulate. The saxophone player withdraws “in protest.” A metronome briefly replaces the conductor.

From this chaos comes beautiful music, but only gradually, struck from venom, compromise and exhaustion. The hilarity of the quarreling orchestra metaphor struck a nerve outside Italy, with The New York Times calling “Prova” a “gloriously funny” film that poked fun at “small-minded madness.”

But Fellini was both captive and participant in the selfish reality he lampooned (a reality that persists). Like Fellini’s own film-making, Italy was incompatible to all known forms of traditional order. His genius was picking an orchestra and faux-documentary to make the point.