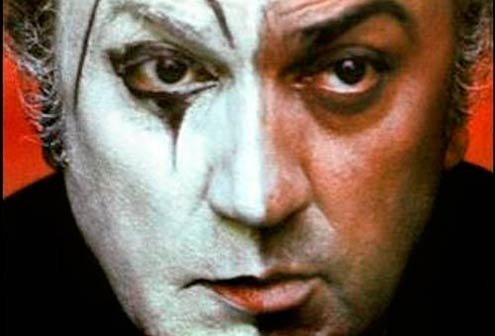 recently saw Federico Fellini’s “Prova d’Orchestra” for the first time since 1986. The director, who died in 1993, had a knack for cutting to the heart of Italy’s past and present. But seeing this “minor” film against the backdrop of current events suggests he was also clairvoyant.

“Prova d’Orchestra” (“Orchestra Rehearsal) is a “mockumentary” about a television crew filming a classical rehearsal, talking to its German conductor, and interviewing members of the Italian orchestra. It was commissioned and made in 1978 for RAI, Italy’s state television, and Fellini worked closely with composer Nino Rota, whose scores were essential for “8 1/2,” “Giulietta degli Spiriti” (“Juliet of the Spirits”) and “Amarcord.”

The cast is a typical Fellini bestiary of emblematic, grotesque and ribald types. There’s a clarinetist who waxes nostalgic about a long-ago compliment he received from Arturo Toscanini; an oversexed female pianist; musicians who instead of playing follow a soccer match on a transistor radio and leaf through a girlie magazine. Percussionists brag about the superiority of Neapolitan rhythm and a violinist spouts florid but empty pseudo-Marxist rhetoric. Union leaders constantly interrupt the goings-on to argue about rules for repeating passages and TV overtime wages. The bugler won’t show up because he’s protesting. What he’s protesting no one knows.

Mayhem and order coexist. During a break, orchestra members scrawl graffiti and smear the walls with excrement. They replace the director with a metronome (which they later destroy). But when the director raps his baton and shouts Achtung! the musicians finally play in unison — so feverishly that they end up tearing off their clothes.

When a giant wrecking ball bursts in and kills the harpist, the orchestra plays on amid the wreckage, with the director exhorting, “We must each concentrate on our instrument. We have only the notes to hang onto…”

Fellini’s mix of caricature, national stereotypes, self-reference and realism ensure a metaphorical reading of the narrative. When it originally came out, some saw the film as expression of nostalgia for the kind of order afforded by a dictatorship. Others claimed it was a metaphor for 1968 and the wave of radical terrorism that swept through the country in the ensuing decade. Still others claimed it was a meditation on artistic creation. Fellini himself mentioned a link to the abduction and murder of politician Aldo Moro by the extreme leftist Red Brigades, which occurred shortly before the film came out.

Fellini’s insight into what ails Italy was uncanny then, and remains so today. The orchestra is composed mostly of elderly males. Regional rivalries prevail. People choose private escapes, whether soccer or trashy magazines, over collective action. Unions block progress. Only a German leader can bring order to Italian-made chaos.

There are also newer connections. There’s an irresistible comparison between the metronome’s replacement of the flesh-and-blood conductor and the ascension of Prime Minister Mario Monti’s “technical” government — perceived by some as mechanical and impersonal. The wrecking ball bursts in like the 2008 collapse of Lehman Brothers and the ensuing sovereign debt crisis, which has brought Italy, and the euro, to the brink of collapse. The final frames of “Prova,” which are completely black with a voice-over river of Teutonic invective from the conductor, flirt bizarrely with enduring rumors that German Chancellor Angela Merkel actually asked Italian President Giorgio Napolitano to save Italy, and Europe, by nudging out controversial incumbent Silvio Berlusconi last fall.

Fellini’s look at the realities of Italy’s artistic are all quite real; no metaphors needed — even four decades later. Every year strike threats menace the season premier of La Scala’s famed opera house. Riccardo Muti’s squabbles with unions are legendary. Foreign artists who work in Italy often marvel at the clerk-like habits of Italian artists. No doubt many would agree with Fellini’s musicians, who compare themselves to clock-punching Fiat auto workers.

The release of “Prova d’Orchestra” is emblematic. It was only shown on RAI, the network that commissioned it, after 10 months of disputes (it was released in theaters before it even made it to TV). Nino Rota died in April 1979, before its TV airing.

Fellini set the film in a windowless 13th century building that was both an oratorio and papal tomb, as if to emphasize the intrusiveness of Italy’s artistic past. The venue mirrors the cultural establishment’s isolation and Italy’s failure to use artistic resources to reach a broader public or to create new art worthy of its heritage.

Over the course of the postwar, Italy’s cultural elite grew estranged. It also developed undisguised and paternalistic contempt towards the Italian masses. This created a vacuum into which the shrewd Berlusconi fit. From the start, he portrayed himself as the explicit leader of class war directed against the country’s cultural elites — led by the judiciary and intellectuals.

Nearly 35 years ago, Fellini had already identified the landscape that would eventually allow Berlusconi and his electorate to care so little about Italian culture.

Though Fellini offers no way out of the bleakness, he does suggest where the seeds of change need to be planted. At the same time, Berlusconi, who turns 76 in September, is back on the political scene. Why? He thinks the ground that won consensus 20 years ago remains fertile. He may be right.