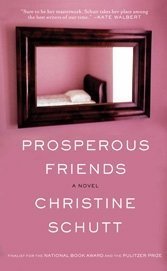 With Christine Schutt, prose is handmaiden or butler. It carries a story’s bags with poise enough to make the idea of a dull commute impossible. Schutt wants to take you into a paneled compartment. And she does, sprinkling (often toxic) gold dust style on the rise and fall of handsome writer Ned Bourne and lovely-to-look Isabel Stark, a well-off thirty-something East Coast couple in “a childless, dogless marriage…” destined to come undone via depression, ennui and adultery. It is a Fitzgerald-like tale of inner undoing that belies outer assurance. Isabel is frail and troubled, ever-teary — “she was so often in doubt…” and “I’m poison…” Complicit in the general doubt are the couple’s close friends and illicit lovers, including husband Ned’s best friend (and lover) Phoebe. Isabel makes her own minor mess, an entanglement with an aging painter named Clive Harris, who sees her as a “sometimes little-mistress with a governess’s self-abasement.” The venues of these various “waylaid people” are London and Rome, Manhattan and Maine, and memory itself. The human hiccup is that trust funds can’t buy love any more than nice lodgings can assure affection, or stop it from being frittered away. Love is all around, at all ages, but often miscarried.

Scathed relationships speak a language Schutt’s word watts exist to illuminate. A badly cut and bandaged finger the morning after “is swami heavy headed and hung over.” Clouds are nudged into storms whose wetness crafts lovemaking. A gardening wife no longer sexual active makes do with “pink wind, timid sun” and the patio look of her “fancy pussytoes.” Clive Harris and a girl named Emma together in a pool frolic in a “blue square of water against pink verticals,” this while the nearby sprinkler system spins and spurts. Schutt’s privileged people do not think but leak. Assertion is a byproduct of sadness, and sadness is constant (“You make me more hateful than I am,” Ned tells his therapist). Migraine-rich Isabel’s supreme fragile-ness is the illness of all, “the sloppy human element” modulated only by degree.

This is a novel about lost-and-found affection whose question of choice is “Why don’t you love me?” Prosperous friends are everywhere, as are their companionable stains.