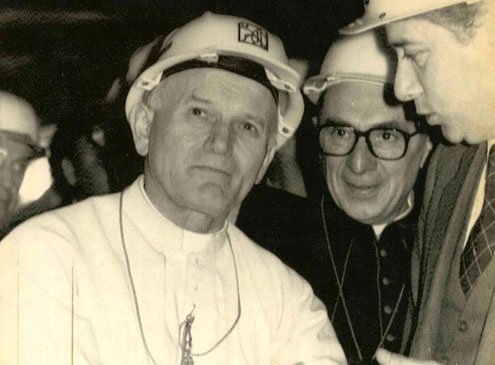 Pope John Paul II visiting a mine in 1980. No patience for Liberation Theology.
M

y Polish-born mother was skeptical of Pope John Paul II. She was unmoved by the superstar globetrotting that followed his 1978 election and attributed his wanderlust to having escaped the claustrophobia of Communist Poland. “He’s a Pole. He likes to travel,” she told me laconically.

The observation wasn’t bitter. His election had moved her to tears, a rare occurrence for a woman who saw Vatican intentions in the unsavory light of Italian Catholic politics.

Both my mother and Karol Wojtyla were born in 1921, she in Warsaw, he in Krakow. She had fled to Rome in 1939 after the Nazi invasion. Wojtyla remained at home, joined the priesthood and endured the decades of state atheism that eventually recharged the crusading side of Catholicism.

Wojtyla’s unexpected election aligned the Polish stars. A conciliator at home (his mentor, Cardinal Stefan Wyszynski, played crusty militant), Wojtyla as pope could now use his beloved homeland as a test case for anti-communism and the right to religious freedom. Provincial but brilliant, endowed with a winning smile, he also understood the appeal of mass media, and his personality in its context.

He’s now closing in on Catholicism’s lifetime achievement award, sainthood, an honor coming at him in record time by Vatican standards. The idea is to swiftly reward three decades of celebrity status to help boost the faith’s flagging global image.

Wojtyla’s historical role is undeniable. He redrew the papacy. At the same time it’s worth remembering that early Christians disdained sainthood as pagan idolatry (Jesus never mentioned saints). Moreover, Wojtyla could also be stubborn, if not spiteful.

His obsession with slaying communism (which would then usher in his other enemy, amoral capitalism) papered over benign tolerance for self-serving generals and juntas, most in Central and South America, who used Catholic cover stories to prop up police states. Busy with Poland, Wojtyla tolerated ferocious bedfellows to exorcise alarger evil. In this way he borrowed expediency from the Cold War United States.

His least saintly behavior concerned the handling Liberation Theology, and Oscar Romero, the modest archbishop of San Salvador. For its many Vatican detractors, Liberation Theology was Jesuit-inspired movement that got too close to politics in its embrace of the poor. If dictators were Catholics, their opponents were seen as tantamount to religious Communists.

The apolitical Romero, shocked by the audacity of half-a-dozen priest killings, lost his cool following a 1979 decision by American President Jimmy Carter to continue funding the Salvadoran government. That a man sensitive to human rights would defer to death squads to ensure the geopolitical case against communism upset Romero.

In early 1979, after a receiving an award in Belgium, Romero traveled to Rome to meet the pope, who kept him waiting six weeks, and finally saw him only with reluctance. Romero left admonished and disappointed. In the weeks that followed, the Vatican ramped up its denunciations of Liberation Theology, threatening to punish its theological supporters. In Romero’s case, it announced it would be sending an envoy to assist him, tantamount to a sacking.

By early 1980 it was evident that Romero was no more loved by the pope than Polish Gen. Wojiech Jaruzelski, the Communist military leader of Poland. Aided and abetted by a cabal of South American cardinals disdainful of the Jesuit challenge, Wojtyla upheld the hard line. Priests that preached against junta oppression were portrayed within the Vatican as contaminated by atheistic intellectuals.

When the pope traveled to the region, he avoided meeting with Romero. Wojtyla’s lieutenant, the head of the church’s watchdog body, now Pope Benedict XVI, was tasked with keeping up with dissident voices such as Romero’s.

The archbishop made a final effort to persuade the pope in January 1980, six months after Wojtyla’s triumphant return to Poland, which firmed up his global superstar status.

Romero got nowhere. In his diary he wrote that the pope had told him “that we should be concerned not only with defending social justice and love of the poor, but also what could result from a score-settling effort on the part of the popular Left…”

On March 24, 1980, 50 days after his final pontifical appeal, Romero was shot dead in San Salvador hospital chapel while saying Mass. Despite the murder and its martyr-like circumstances (Romero died at the alter), the Vatican’s response was muted. It limited itself to praising a “zealous” pastor and regretting his loss. His assassination helped set in motion a 12-year civil war that left 80,000 dead.

The cause for Romero’s own canonization, advanced only years later, stalled a decade ago, with Liberation Theology and Jesuit activism still considered obstacles.

Poking around the closets of saints-to-be may not suit holy days, but equally unbecoming is a sentimental rendering of a history that blesses indiscriminately.