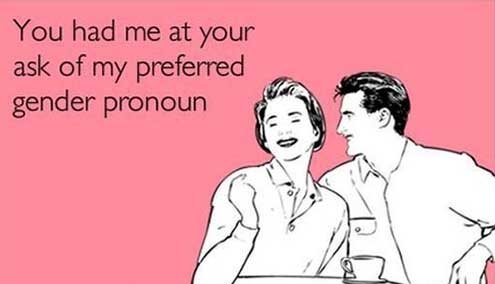 Getting past traditional binary references…
A

fter a grueling swim practice I’m standing naked in the shower when the inevitable question (in Italian) comes from the guy across from me. I’ve just joined the team and he’s curious about me. “Did you marry an italiana?” he asks, using the feminine form, which means an Italian woman.

At this point I can either lie or correct him. I say, “No, I married an italiano,” using the masculine form which means an Italian man.

He looks confused as if he can’t understand why I made such a basic linguistic mistake.

The guy beside me utters a nervous little giggle.

The guy who’s asked the question looks at me for a moment, then says, “Oh, now I understand.”

Italian, like the other romance languages, uses a complex system of gender distinctions for nouns and pronouns with agreements in articles, verbs and complements. Although English relies on the gender pronouns, he and she, it generally does not make agreement with other parts of speech. English is easier than Italian when it comes to expressing gender-neutral terminology.

In English the gendered third person singular, he and she, is becoming increasingly problematic because of the binary implication that there are only two possible gender choices. The third person plural, they, however, is not gendered. For years, while I was still in the closet, I became very adept at answering direct questions about my “love life” without actually disclosing the gender of my partner. I’d substitute the third person plural, they, for the third person singular, he. For example, “Yes, they work at the university.” If anyone ever noticed, no one ever mentioned it or even asked for clarification about the gender of my partners.

We are currently facing a major revolution in our perception of gender and who we are and what we constitute. As most linguists agree, language does not determine but can greatly influence culture and perception. Many are questioning how our language will reflect this social evolution, experimenting along the way. Unfortunately, nothing sets a fire faster than the issue of language change.

Traditionalists would argue for preserving the strict gender dialectic, claiming that there are only two genders, male and female, and the pronouns, he and she, suffice.

Revisionists would state that both biologically and socially people exist on a gender continuum with a great deal of variation and that language should evolve to realistically reflect the shift in understanding of what it means to be human both from a biological and a social point of view.

For obvious reasons, the pronoun, “it” as a gender- neutral alternative, rarely enters the discussion. Grammatically speaking, “it” is reserved for objects, animals and babies. However, everyone I know uses the pronouns he or she to refer to their dog or cat. In most cases, the use of “it,” when applied to people, is offensive.

In English, the use of “one,” which has mostly fallen out of practice, was a way that gender designations could be avoided. For example, “If one is interested in the position, one should apply directly.” Of course, the male assumption was often implicit, not to mention the use of “one” sounds pretentious and classist.

I also recall a brief experiment in the 1980s in which “per,” short for person, was suggested as a possible substitution for gender pronouns. For example, “Per should send per’s application to the office.” Unfortunately, like many contrived linguistic changes, it felt awkward and somehow lacked tonality.

Earlier this year I received a query from my publisher asking me which pronouns I preferred. I confess that at first I had no idea what they were talking about.

A friend of mine who teaches at a U.S. university received a pamphlet about LGBTQ language, which suggested, “It’s a good practice to ask someone what pronouns they use and offer your own when introducing yourself. For example, ‘Hi my name is and I use he/him/his pronouns.'”

Paradoxically, though Italian is a highly gendered language, there is an alternative for pronouns and agreements. The lei form, which literally means “she,” is used for formal and polite conversations when referring to both men and women. For example, the informal Tu, come stai? (How are you?) becomes the formal, Lei, come sta? (How is she?). Though I’ve never been able to master the form, to the Italian ear referring to an elderly or respected man as she is completely normal.

The function of language is to describe our universe and the way we perceive it. As our perceptions and knowledge change so to must the language, and that means as our understanding of gender increases we need to modify the language to reflect that understanding. While I’m not convinced it’s polite or even sensitive to ask strangers about their preferred gender pronouns, I don’t see any great obstacles in using a gender-neutral pronoun, such as “they” or something else.

The universe is infinite and the task of language is to describe, classify and give order to the chaos of possibility. As a way to start, we often divide the universe into two parts. Since, we can all understand and relate to the simple distinction between male and female, many language structures rely on a basic binary gender structure. Never mind that gender is everything but binary.

Of course, language is organism that evolves according to linguistic needs and pressure. And though it’s often attempted, the common use of gender and gender- neutral pronouns will be decided by cultural consensus, not by decree (think of George Orwell’s “1984”). As gender awareness increases, it will be interesting to watch the evolution of gendered pronouns in English in the coming years.