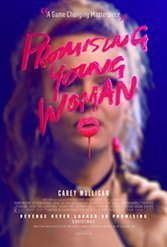 Anyone can recognize someone showing great promise, even without the benefit of a resume.

But building a vita is not what “Promising Young Woman” is about. In fact, at its core, it’s about revenge. Though Fennell’s emphasis on the process of revenge may give a nod to Park Chan-Wook or Quentin Tarantino, hers is a markedly different take on brutality.

Cassie is attempting to get back at those connected to circumstances of a sexual assault on her best friend seven years ago while in med school. Exhibiting cunning and deviance as if they confirmed her credentials, she is intent on humiliating her victims just to watch them squirm. Her primary objective is four people related to the incident, though occasionally she entraps random victims. This is not to say we don’t see her at times struggling with the actuality of her underlying soft skills and kinder sensitive side.

Mulligan is perfectly cast to convey a character whose brilliance has always guided her. She carries the movie with such expert facial control she can toggle from victim to tormentor without a tell. The supporting cast, full of familiar faces, is also felicitous as they appear as helpless in their oblivion as Cassie is in the ease with which she manipulates them. Burnham is no exception as new boyfriend, Ryan, who unwittingly pacifies Cassie enough to encourage her to leave behind any notions to get even. His genuine nonchalance while playfully wooing her in the pharmacy even allows all of us to forget it.

As their relationship develops, the meticulous set designs accented with overstated colors quietly transition spaces once imposing and threatening into backdrops of repose, suggesting how simply the presence of love can transform the world. Revenge loses its luster in acts and words of affection.

Despite some slight chronological flaws, “Promising Young Woman” succeeds in part as a supplement to the #MeToo movement. It may deliver less than what is typically expected from the revenge genre, but what we do get is more about adding to the conversations taking place. Cassie may agree that the best revenge is living well, but that doesn’t mean that how we live shouldn’t be up for discussion.