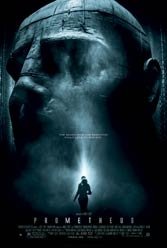 It’s the year 2087. Digging in Scottish hills, archeologists Elizabeth (Noomi Rapace) and Charlie (Logan Marshall-Green) find a “star map” that suggests all humanity may derive from mysterious beings on a distant planet. Flash forward six years. Charlie, Elizabeth, and a motley crew are now aboard the starship “Prometheus” bound for you know where. Among them is a highly sophisticated but soulless android called David (Michael Fassbender) and a rakish Weyland corporate exec named Meredith Vickers (a robotic Charlize Theron), both tied to Weyland boss Peter Weyland (Guy Pearce) who has subsidized the wooly mission.

Fans of director Ridley Scott will associate Weyland with the Weylan-Yutani mining company whose blue-collar space truckers met a horrific fate in the Sigourney Weaver-powered 1978 “Alien,” Scott’s scariest film and still among the best pure sci-fi thrillers ever made. But it matters little whether “Prometheus” is intended as “Alien” prequel — how the creature came to be — or as a stand-alone exercise in DNA-scented spiritualism. The outcome is a disjointed compilation of stunning Icelandic landscapes, predictable one-liners, à la carte digital monsters, and Oedipal quandaries that squander the focused and claustrophobic intelligence of the original.

Elizabeth, Charlie, David, Vickers and the rest of the crew are forgettable caricatures lacking in human chemistry and condemned to reams of 21st-century parody. Elizabeth and “bro”-talking Charlie are an especially improbable couple. When something sinister begins stirring in Elizabeth’s barren belly ‘droid Dave actually utters the line, “I didn’t know you had it in you…”

British veteran Scott (“Blade Runner,” “Thelma and Louise,” “Black Hawk Down”) is a clever and capable director who knows how to pick actors and scripts. Together, “Alien” and “Blade Runner” are in a league of their own. Why he chose to concoct this contract hit on his sci-fi legacy is inexplicable unless placed in the context the Peter Weyland character, a man at home with hubris and profit (read sequel). Only Idris Elba as Janek, the ship’s tongue-in-cheek captain, is sly enough to suggest he knows he’s at the helm of a clunker.