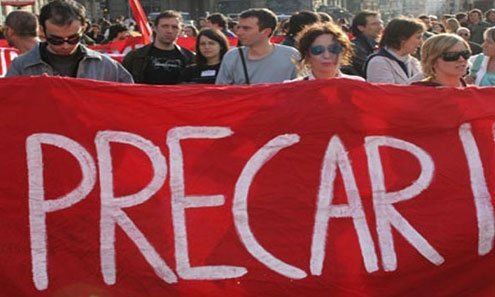 The Italian work market is dominated by unstable positions, called "precarious" ones, and an absence of contracts.
W

hether the country under scrutiny is the United States or Italy, the sheer number of existing laws can be seen as overwhelming. Some have long been convinced that government legislation interferes far too much in personal freedoms.

But then come stories of employers who exploit unpaid interns, some of them under-aged, demanding that they do work that paid employees should be doing instead. Recession is an easy excuse. Feeling the economic squeeze, some employers seek ways to stay in business while cutting costs. Meanwhile, young job seekers, presented with abysmal work opportunities, hope an internship might lead to a real job.

It’s a perfect setup for abuse, which in turn leads to more laws whose drafters hope will limit the damage.

The point was brought home to me by an Italy-based American nonprofit foundation. For nearly 20 years, it has brought together artists, writers and musicians from around the world. The foundation’s legal status in Italy is identical to that of American universities with permanent educational programs here.

Each year the foundation takes on between two and four interns (Italian and non-Italian), picked after a competitive application process in accordance with the foundation’s internship program. The interns receive room, board, and a small weekly sum to defray personal expenses. They’re given a chance to learn about a number of cultural disciplines and to receive training in administration and public speaking. The foundation benefits from their youthful energy, enthusiasm, and hands-on assistance, hoping their individual skills are groomed and raised to levels that would make them more attractive to paying employers.

The interns are always college students or recent graduates — mostly those just starting out in their working lives. Almost all of the foundation’s Italian interns have gone on to find paying permanent jobs in the arts.

Recently, however, the Italian labor department informed the foundation that it could no longer take on Italian interns. Instead, it was told it would need to hire at least one person in a permanent position.

Unwittingly, the order defeated the ideas and priorities of the internship program, which exists to train young people and prepare them for jobs. If the decision holds, the foundation faces the prospect of taking on only American interns. But the foundation believes in the goals of its internship program and is challenging the Italian labor department’s position.

College graduates in Italy must often serve several internships (often referred to as “stages”) to obtain the training they need to qualify for a hired position. These internships can be long, from six-to-12 months, and are often unpaid. The exploitation of young people in so-called stages is rampant.

In a number of industries, including restaurants, hotels, filmmaking, retail, medicine, architecture, law, and accounting, the use of unpaid interns has increased with the deepening of the economic crisis.

Often, rather than receive the training they seek, interns are required to do work, even menial work, which a paid staff should be doing. To combat extensive non-remuneration (and notwithstanding a controversial remark that youth shouldn’t be “choosy” about accepting a job when offered), Italian Labor Minister Elsa Fornero recently pushed through a law mandating that interns receive compensation.

The exploitation of young workers is just as severe in the U.S., even in the face of the Fair Labor Standards Act and state laws regulating the practice and requiring that interns receive a minimum wage unless specific conditions are met (such as providing training equivalent to that received in an education environment).

But there’s a catch. While internships are a necessary step to further employment, interns are not in a position to challenge the legality of an employer’s program, at least not at an individual level. To do so would mean costly legal proceedings for little reward as well as running the real risk of being “blacklisted” from future paid employment in the intern’s chosen field. This hasn’t stopped American class-action lawsuits against particularly egregious employers. Still, the problem persists.

While laws have their place in setting standards and encouraging behavior, they’re not a panacea for changing employer behavior. As the story of the American foundation illustrates, the chilling effect of law is no substitute for wisely thought out priorities that take a longer view. If helping and nurturing youth isn’t what the long view is about, then we’re all in trouble.