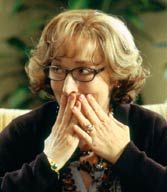 Streep is a guilty pleasure in "Prime."

Go ahead, you try making an inter-religious romantic comedy that spoofs Freud and puts a woman on the wrong side of age and faith differences. And that’s just for starters. Bless writer-director Ben Younger for slotting the right actors into a script that plays to intelligence and compassion.

Uma Thurman is Rafi, a freshly-divorced 37-year-old Manhattanite with complexes to spare and a doting Jewish shrink named Lisa (Meryl Streep) who’s says things like “Focus on the now for now.” Rafi meets David (Bryan Greenberg), a nice Jewish boy who lives with his grandparents and whose mother wants him to marry a nice Jewish girl. David is… 23. (“I have t-shirts older than you,” Rafi tells David after meeting him).

But what if Dr. Lisa were… David’s mother? “You were so right about Jewish men,” suddenly uninhibited Rafi gushes at Lisa, who guzzles water like gin. And the clincher: “His penis is so beautiful I want to knit it a hat.” All-weather Streep hams it up at every turn and the result is a tenderly comedic Annie Hall-meets-Keystone Kops for the 21st century.

Too much telling messes up a good thing, and while Younger’s storyline lapses at the end, the flick is still a fizzy treasure. Thurman, Streep, and Greenberg are all charming. So is Gil Deeble, who plays Rafi’s young doorman like a disapproving Hutu warrior.