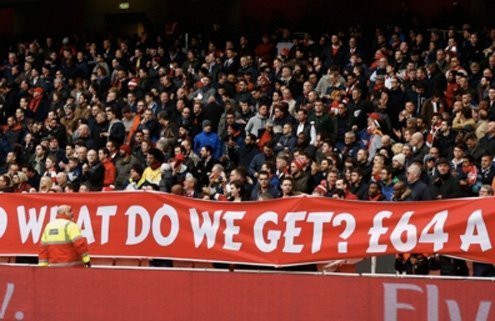 hen Borussia Dortmund defeated Stuttgart 3-1 in the German Cup quarterfinals in February, it was raining more than goals at Stuttgart’s Mercedes-Benz Arena. Twenty minutes into the match, hundreds of tennis balls came cascading down onto the field courtesy of the traveling Dortmund fans.

The Dortmund supporters, a famously anti-corporate rabble clad in their distinctive yellow and black strip, were protesting the high ticket prices charged by their hosts.

“Great tennis” is a German expression of commendation, and the tennis balls were meant to mock the spectacle on display. Whatever the merits of German humor, their message is one that has caught hold at football clubs across Europe, in what has been an Arab Spring of affordable ticket demonstrations.

Days before, Liverpool fans staged a 77th minute exodus during a home match to protest their own club’s introduction of a new £77 ticket (about €100).

Meanwhile, Arsenal season ticket holders were up in arms when the club planned to levy a surcharge for those attending the Champions League Round of 16-match against Barcelona at Emirates Stadium, home to what is already the most expensive season ticket in the Premier League at £2,039 (€2,620). In both the Liverpool and Arsenal cases, the uproar has caused the clubs to reverse their price hikes, showing a modicum of restraint and moderation still exists at the boardroom level.

The call to action has also reached Spain, where Atletico Madrid fans boycotted their away match at city rivals Getafe, which doubled the price of admission for matches against high profile visitors.

Across Europe and in England in particular, the ticket price debate is emblematic of the growing paradox between the corporatization of football and its working class appeal. In Stuttgart, Mercedes-Benz bought the stadium naming rights, with Sky paying hand over first to transmit the games. But the fact remains that a large subset of the Stuttgart support base can’t afford Mercedes-Benz ticket prices. Still, there’s enough of an upscale clientele to allow clubs — the rich and well-supported ones in particular — to pursue unfettered price hikes.

It is particularly hurtful to fans that gate receipts, especially in England, account for a decreasing share of the overall revenue pie. According to UEFA’s most recent Club Benchmarking report, only €685 million, or 18 percent, of Premier League clubs’ yearly €3.9 billion in revenue comes from match day intake. Sponsorship generates nearly twice as much, while media rights are more than three times higher. In Germany and Spain, where overall revenue is roughly half of England, match day revenues still accounted for only 20 percent of the total. With money pouring in from every angle, ticket price hikes seem gratuitously greedy.

There is perhaps no better club to illustrate the paradoxical nature of the modern football club than Manchester City. Owned by sheikhs from the Abu Dhabi royal family, its fan base is a distinctly local following from Britain’s first industrial city, which retains its strong working class complexion.

I visited Manchester City’s stunning Etihad Stadium last month and paid £49 (€63) to sit towards the back of the third and highest tier in the away section. That was in addition to the £75 (€96) spent on train fare. While many clubs do subsidize away travel on hired buses, the cost remains prohibitive. For any away fans traveling to London, where average salaries are 35 to 60 percent higher than other Premier League cities, it is an expensive day trip.

While clubs have the right to maximize revenues, there are ways to do so without alienating fans. Prices need to better reflect the increasingly unequal tiers of clubs’ fan bases. The BBC’s “Price of Football” study showed that the cheapest single adult match ticket, averaged across Premier League clubs for the 2015-16 season, came to £31 (€40). On average, the most expensive ticket costs £57 (€73). For the typical club, there’s an inelastic price range that excludes lower income fans while not reflecting what wealthier fans might be willing to pay.

Most clubs have agreements with third-party ticket vendors, such as Stubhub or Viagogo, that allow supporters with tickets to re-sell them at whatever markup they can fetch. In theory, clubs reluctant to have a fixed tier of even costlier tickets could opt to cut out these third-party middlemen and auction a certain subset of tickets for each match at whatever price they could command. This increased revenue would help make more tickets available at lower prices.

Clubs have undoubtedly grown more creative in chasing new revenue streams, but remain hardheaded when it comes to ticketing. It is about time that they adapt to the changing realities faced by those who sustain them.