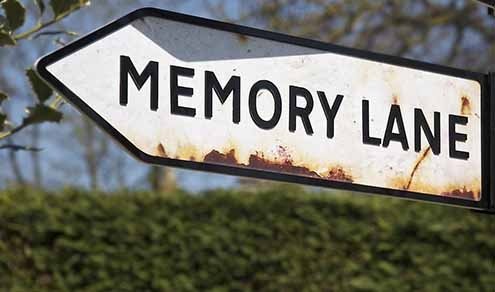 The rust of time can make memories hard to remember in detail.
&

#8220;How did we meet? I’m embarrassed to admit I can’t recall.” I was sitting across from Laurent at a back table in my favorite French bistro. As a duo played Django Reinhardt-style jazz in the background, we huddled around the candlelight trying to read the menu with a bottle of Beaujolais.

“You don’t recall?” he said incredulous.

“We were at London Heathrow airport. You were in a long line inching toward a passport security check. You had white cords hanging from your ears, listening to music. You were moving and dancing in your own world.”

It started coming back. It must have been 15 years ago. The iPod had just been invented and the music kept me company when I traveled.

“I was really taken with the way you were so happy and free. I was ahead of you in line, but I got out of line to wait for you. Do you recall any of this?”

I now nodded, smiling. But I had a sense I was making up a memory as he described it.

The passage of time had made the details vague.

“I asked if you wanted to have a glass of wine in the prestige lounge. You agreed.”

“Yes, I recall that now.” In fact, I was mostly pretending. I ventured a safe guess. “Was there a huge window of glass where we sat overlooking aircraft?”

“That’s right. And I remember thinking that it wasn’t the music that was making you smile, after all. It was just who you were.”

I laughed and raised my wine glass. “A toast to our long friendship, and to the fact that at least one of us recalls how we met!”

An order of baked clams arrived. They were smothered in butter and pesto. We devoured an order, dunking soft bread into half shells. We poured wine.

“What about Rome?” I asked him. “Do you remember when we met at Piazza di Spagna years later? You were working close by. You quizzed me about my love life and told me about the place you bought in Greece, on Naxos.”

“Is that what we talked about? I just recall we went to that trattoria that specializes in cacio e pepe. I still go to that place sometimes. What’s the name of that place? Gosh. I forget. How could I forget?”

“And we had a great dinner in the West Village on Prince Street when you came to do work for the United Nations. What, was that about eight years ago? It was winter and you were very late arriving. I kept walking outside looking up the block in the snow thinking, ‘Where the hell is he?’ Then when your cab pulled up I was so happy to see you.”

“Ah yes,” he replied laughing. “I was always late!” He paused, looking up and thinking. It appeared it was his turn to pretend to remember.

He was saved by the arrival of our server, who laid out plates of salmon and grilled bass. We ate hungrily, then finished the wine and ordered more.

“How is it,” I asked him, “that we’ve had such a long friendship though we both have such fallible memories about much of it?”

“I don’t know,” he said. “Age? The wine? The years? The insanity that comes from living in uncertain times?”

“But we must always have a good time.” he said. “Whenever I get to New York, I can’t wait to see you.”

That was the case for me, too, I told me. The joy was always infectious when we caught up.

“We need to see each other more often” I said. “Can we make a point of it?”

“Yes, we must.” he committed. “We absolutely must.”

We were the last table to leave after dinner. Laurent walked me to the subway entrance.

“Until we meet again,” he said with a warm embrace.

I wondered when that might be. And more curiously, what of tonight might we both recall? I imagined a future conversation.

“Was it a French bistro on Smith Street in Brooklyn? Was that where we had those amazing clams and that bottle of Beaujolais? Or was it in Rome?”

I knew one thing for certain: No matter how many times memory might continue to fail us, friendship would not.