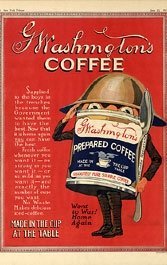 The army bought in.
L

Instant’s 20th-century high priest was George Constant Louis Washington, a U.S. citizen by way of Brussels, London and Brooklyn. He rustled cattle in Guatemala before his big brown idea.

Washington’s first ads came before World War I. He named his powder Red E Coffee. He sold convenience, modernity, efficiency (like the British builders of the “Titanic”). The military bought the hype. Neither rats, nor rain, nor mud of the Western front stopped the gush. One GI’s hosanna was pure ad text: “Every night I offer up a special petition to the health and well-being of Mr. Washington.”

Coffee was first a Cup of George, then a cup of Joe, after the Navy secretary who made George the strongest drink on warships.

But the fuss settled (so, for that matter, did the “Titanic”). Instant coffee gradually acquired a new label, and a toxic one in marketing terms: Novelty product. The slogan “Made in the cup, on the table!” lost its grip as brewed coffee regained steam. People wised up to instant’s shortcomings.

In truth, first impression hesitancy was more European. Skepticism reined some of the enlightenment’s gallop. Criticism and disbelief was seen to give a culture its edge.

Even America’s fondness for all things fresh and quick sometimes felt the wrath of pragmatism and Puritan reserve. The expressions said it all: “Look before you leap,” “Think twice,” “A bird in hand…”

By way of metaphor, the latest instant coffee occupies a vaster and more complex daily space. The new instant might be labeled “Living in the Moment” and compels all facets of life, with communication first among equals.

For ages, social interaction was unavailable to the instant. Distance prevailed. But telegraphy and telephony, born around the time of fast coffee, turned all that on end, making near and far relative.

But aside from personal communications, “presto” news still lagged. Newspapers, radio, and later television all demanded time, a night in the case of a newspaper, hours for most radio and TV.

Wary of George and Joe, news in the free world still hung behind filters. Craft was part of the slowdown.

Not now. Personal communication is the instant coffee of life in the moment. “Made in the cup, on the table!”

Excitement is a slogan. Internet writers exhale feelings into momentary certainties. Looking before leaping has been replaced by leaping as proof of being. A bird in hand is worth 10 in a bush of one’s own making.

Writing about an American football game in which a beloved home team lost a game in the final seconds (only the ninth game in a 16-game season), a seasoned but a flustered writer blurted: “That’s it. Season over.” Why exaggerate? Because his blog, like many, thrives on rant. But the season wasn’t over, and isn’t. Professional writers were once groomed to know better: Pause, temper, revise.

But exaggeration is the caffeine of 21st century composition. It’s the presto powder of the stirred-up now. Spreading the stir is what confers meaning, much as social scientists warned about TV — prematurely in fact, since they couldn’t imagine a time when affect and conveyance would mingle and merge, in a cup, on a table.

Sure, Slow Food and an emphasis on nutrition recently slowed seven decades of Fast Food, but that message is preached largely to affluent choir.

What tripped up instant coffee was a broader culture that had still had both time and willingness to say no to the fast stuff, reckoning that even lots of Red E Coffee might not match a few diligently made cups. “Take a moment,” was the prudent message, which upscale chains — think Starbucks — later made shrewdly hip.

There’s another proverb, out of vogue nowadays because it threatens the progressive side of egalitarianism: Too many cooks spoil the broth. For today’s j’accuse gabbers, an eclectic tribe that instantly and impulsively lives on heaping cups of self, foresight has no meaning while endless eclecticism stands in for insight. It’s a risky penny to live by. Tweet that.