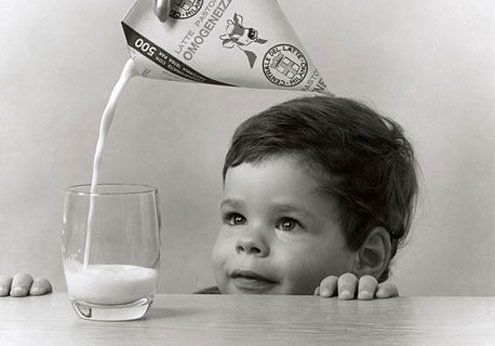 In the 1960s and 70s, funny-looking Tetra Paks were the Italian milk norm.
I

always admired how my mother handled both my brother and me, kept our household intact, and cooked for all of us, including my father. That admiration has only grown since I became a parent. Plenty of times I ask myself how she managed.

It’s not only the way she handled her kids but also what she had to work with at the time. Italy of the 1970s obviously didn’t come equipped with 21st-century technology. For example, our household didn’t have a dryer, which at the time was a high-end luxury (and still is for some). I remember her hauling huge baskets of washed clothes and linens and hanging them on a thin steel wire line my father had strung between two poles on the terrace. My brother and I played hide and seek among the fluttering clothes.

Though household driers are still rare in Italy, dishwashers are everywhere. Not so in the 1970s. My mother would wash all the dishes, pots and pans by hand. As I got a little older I became a kind of special assistant: I’d help her dry, tidy up, and put things away, which also let me spend more time around her.

Even food packaging was different. There were funny-looking milk Tetra Pak cartons with pointy tip that looked to me like a mother’s nipple. Though the container itself was great invention, its odd shape made it hard to slip into the fridge. You also needed scissors or a knife to open it; it didn’t have a natural spout. Still, it was a staple for decades before today’s standard box carton.

Supermarkets and their products have also boomed (never mind that Rome really didn’t have chain stores until the mid-1980s). Today’s supermarkets, while not American mall-sized, are warehouses of choice. There’s no end to processed food for ovens or microwaves. Food technology has basically had to keep pace with a population in a constant hurry. The truth is that working people have less and less time to themselves, which means less time to cook. Andy Warhol’s Campbell’s soup cans, 1960s pop art that poked fun at marketing and consumer life, can look positively quaint in today’s high-tech world.

A few days ago at the supermarket I saw a plastic salad container in the frozen food department. On one side was plastic cutlery, on the other a bubble of dressing (oil and balsamic vinegar). Press the bubble and its contents were released into the salad — basically press, shake, eat (no prayer necessary).

When you have two kids and a job, the clock ticks double-time. My family’s critical meal is dinner, which is my responsibility. Cooking up something good, fast, and healthy when you get home late can be a challenge. Good often refuses to get along with fast. But I do my best to find a balance.

At our local supermarket, Carrefour, I start by picking up two kinds of chilled purees, spinach and peas and pumpkin and carrots. They’re 100 percent natural with no added preservatives or dyes.

Soup is a quick fix. I pour the purees into a pot of water, and when it starts boiling add whatever pasta I’m cooking. My son Lorenzo really likes stellina, a tiny star-shaped pasta. When the soup is ready, I add extra virgin olive oil and Parmesan. Scottish chef Gordon Ramsay insists Parmesan is the one ingredient that no fridge should ever be without and I agree with him. Lorenzo says Parmesan is his favorite food.

Another Lorenzo-friendly dish, a bit more on the winter side, is ground meatballs in chicken broth à la Pina (my grandmother). I use Star brand meat cubes for the broth. Then, using fresh or defrosted meat, I mix in Parmesan and nutmeg and make golf ball-sized chunks. The broth goes into a medium sized pot, and when it starts boiling I toss in the meatballs and the egg-based pasta. Both these soups take less than 30 minutes to make, start to finish.

Tofu is another useful ingredient when it comes to health, protein, and saving time. Lorenzo often eats it on its own, helpful when you’re on the run. It’s easy to carry, stays fresh in water, and doesn’t necessarily require cooking.

My mother, a hardcore Roman cook, took a long time coming around to her grandson eating tofu. The first time she tried it, she compared it to nibbling on a sponge. On the other hand, plenty of Italians like it cooked.

Tofu aside, even prepackaged food has some diamonds in the rough. One of them is ravioli manufactured by Giovanni Rana. My cooking teacher, who endorses Rana’s products, insists that despite mass distribution, these vacuum-sealed ravioli are the best you can find. It’s another quick fix. Just drop the ravioli into boiling salted water, boil for three minutes (no longer), drain, and add oil or butter, some Parmesan and a little sage. Presto.

These are my three favorite fallbacks when I get home late and I’m too tired to be adventurous. But if you have more time on your hands, feel free to get creative.

— Mix the pureed potatoes and the flour. Spread out the mixture and add the egg into the middle. Stir until it forms soft but firm dough. Let the dough rest for 30 minutes covered with a cloth.

— Roll the dough to create a layer of about 1/2 cm thick. Using a cookie cutter, stencil out stars until you’ve run out of dough.

— After cleaning the carrots and zucchini, use the cookie-cutter on the vegetables to make colored stars. Toss the carrot and zucchini stars into a liter of water, setting aside the scraps. Add salt and extra virgin olive oil.

— After the soup comes to a boil, cook for 20 minutes. Then add the pasta stars and cook for another 10 minutes. Finally, add the parsley and grated Parmesan.

Come and get it, kids!