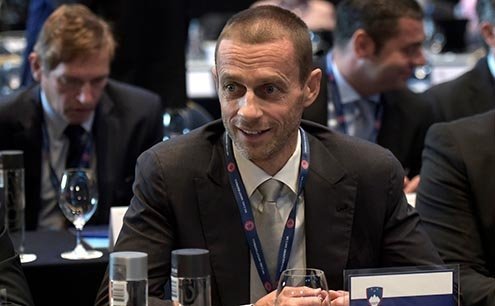 The result isn’t really surprising. Slovenia is a small country, and in football terms there are more small countries in Europe than big ones. Čeferin presented himself as the Robin Hood candidate, promising to guard against the runaway influence and commercial gain of the big clubs in England, Spain, Germany and Italy. Unlike the U.S. Electoral College, countries’ votes aren’t weighted by their size or importance.

Even more curious than the outcome of the election itself was that three of those four big federations ultimately voted in the Slovenian’s favor. Only England voted for the loser. Čeferin built a coalition that extended far beyond his backyard.

Stepping back and looking at Čeferin’s appointment from a wider perspective, it’s clear the new president will face a daunting, if not impossible task. Only time will tell whether his tenure consists of paying mere lip service to his stated goal.

Before his election, the summer at UEFA had been all about the “little guy” being crushed. In late August, UEFA formally announced that starting in the 2018 season, the four federations with highest UEFA coefficients — currently Spain, Germany, England, and Italy — would be guaranteed four teams in each season’s Champions League group stage.

These plans were already public knowledge in April, and were the result of the big, revenue-generating clubs lobbying for a higher number of guaranteed places in the competition, a formula that undoubtedly increases sponsorship, TV rights, and advertising revenues.

The threat of a breakaway Super League was even used as leverage to force the hand of UEFA’s Executive Committee, its Club Competitions Committee, and the European Club Association Board. All three came together to ratify the format changes. Yet specter of the Super League dies hard, and the idea seems likely to be revived before 2021, when the new format expires.

So while it is one thing for the smaller nations to vote for a president that claims to stand for their interests, it is an entirely different matter for the Executive Committee — a smaller group of 16 member association heads, led by the UEFA president himself — to stand up to the big clubs that represent their very own cash cows.

Čeferin will have a difficult tightrope to walk, keeping the elite clubs happy while delivering on his original promise to 55 member countries, the vast majority of which will now see diminished chances of their clubs succeeding in the most lucrative continental club competition.

As for why Italy, Germany, and Spain voted for Čeferin, it’s not implausible that, having secured a major victory already and performing some basic election math, they wanted to be on the winning side — as well as in the new president’s good graces.

Of the four countries that will enjoy four guaranteed Champions League places — accounting for half of the 32 group stage teams — Italy have pulled off the biggest coup. Not only does Italy have two guaranteed places in the current format compared to the other countries’ three, but Italy’s third team — which must enter through a playoff qualifier — has failed to do so in five of the last six seasons.

Juventus has almost singlehandedly kept up Italy’s UEFA coefficient with its strong Champions League performances over the last couple seasons, and with Serie A’s Champions League quota now effectively doubled, there is renewed hope for Milan and Inter to return to Europe’s biggest stage, even if the promotion wasn’t earned.

After all this, one might think Čeferin could view Italy as poster boy for what’s wrong with the new format — privileging reputation and revenue over an open meritocracy. That didn’t stop Carlo Tavecchio of FIGC — the Italian football governing body — from being the first of the big federations to endorse Čeferin back in June. In fact, Italy’s endorsement of Čeferin came even before he announced his candidacy.

What, if anything, Tavecchio received in return is anyone’s guess. In the shadowy world of football governing bodies, the rule of thumb is to expect the unexpected, and frustratingly, the corrupt. Čeferin was allegedly the preferred pick of Gianni Infantino, former UEFA secretary and now president of FIFA. FIFA is supposed to remain neutral on the matter, officially at least. The last time FIFA and UEFA heads worked together, there were FBI investigations and the disgraced departures of both organizations’ presidents, Sepp Blatter and Michel Platini, respectively.

Only time will tell whether Čeferin’s presidency will see him play the role of reformist visionary, invisible bureaucrat, or vote-trading crony. By then, the future of Champions League as we know it may look completely different.