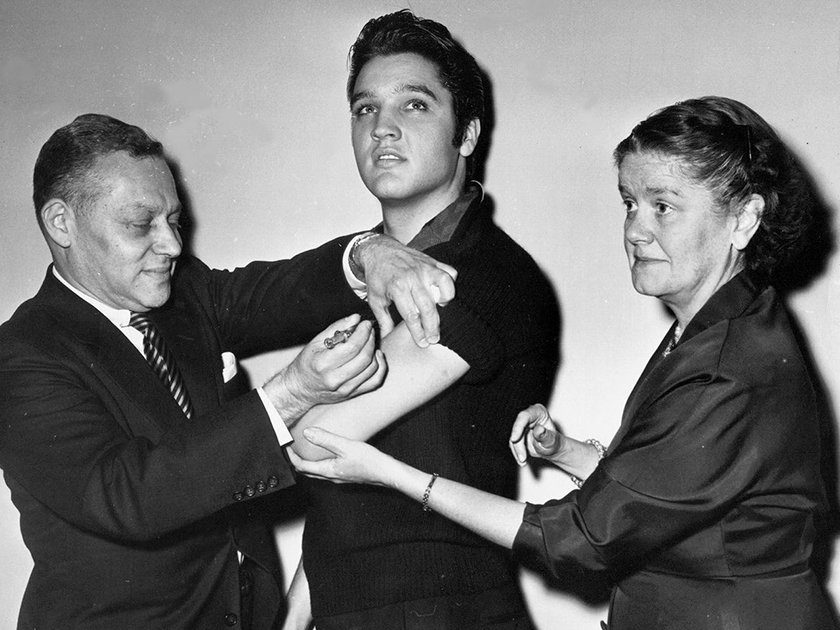 Then-musical superstar Elvis Presley getting a polio vaccine shot in 1956 to reassure the citizenry.
T

he approval of effective COVID-19 vaccines in the United States was supposed to herald a massive opening salvo of preventive shots. Operation Warp Speed officials promised 300 million doses by New Year’s and said the entire U.S. population of 320 million could be inoculated by June. That was before realism and recalculation stepped in. The revised math suggests 40 million doses in December, with 200 million more by the end of March. The “New York Times” has called even the revised timetable “ambitious,” which is journalism’s favorite way of announcing skepticism. One experts told the paper that “to meet those kinds of aggressive timelines, all the stars would have to align.” Some states are being allotted such a small number of initial doses (destined for health care workers) that many will struggle just to cover emergency room and intensive care unit staff. One Philadelphia hospital had 3,000 high-risk employees but only 252 vaccination doses, all grabbed up within a day.

True to vindictive form, Donald Trump is attempting to manipulate the timetable in what seems like a transparent effort to punish perceived foes: “As soon as April,” he said, “the vaccine will be available to the entire general population, with the exception of places like New York state.” New York Governor Andrew Cuomo has threatened legal action, but much of this fuss is likely to recede when Joseph Biden takes office.

The real problem is now, in the interim. While Trump arranged with Pfizer to buy 100 million doses, enough for 50 million people, he turned down Pfizer’s offer to provide hundreds of millions of additional vaccine doses. Those additional doses have now been snapped up by the European Union, and since manufacture takes time, additional doses may not reach the US before June or July. Trump signed an executive order demanding that Pfizer welsh on its EU commitments, but U.S. orders don’t travel far in Brussels.

The U.S. has done better with the Moderna vaccine, calling for 80 percent production by March while ordering an additional 100 million doses to make up for the Pfizer snafu. All hope the Phase 3 results from Novavax and Johnson & Johnson, due in January, will yield positive results. But it’s by no means a foregone conclusion.

There’s another critical factor, and that’s working to beat back vaccine reluctance, which is a very real problem, particularly in the African-American community (though resistance exists considerably beyond that group).

It would help if people like LeBron James, Barack Obama, and Sean Hannity put differences aside and lined up for vaccines, emulating Elvis Presley’s famous polio shot in 1956. Overall, I’m optimistic. The vaccines are real and the results credible. I think all but hard-line “anti-vaxxers” will eventually come around.

Pfizer has already started administering the vaccine in Britain, which seems eager to claim first-in-the-West honors. Moderna will follow. Britain, which seemed to regard the vaccine process as a race, was slammed by EU regulators for taking shortcuts, with even Anthony Fauci expressing diplomatic unhappiness. Both the U.S. Food and Drug Administration and the European Medicines Agency insist on examining raw trial data for themselves before approving medications, which British regulators do not, accepting drug company data.

Europe is nonetheless expected to authorize Pfizer’s vaccine on Dec. 29 and Moderna’s on Jan. 12. Most of Pfizer’s doses will be distributed on an expedited basis, but won’t make a massive mark until March. Countries are scrambling to outfit hospitals with ultra-deep freezer units and set up vaccination centers in gymnasiums, conference centers, and arenas.

Germany and France claim they’ll start their vaccination campaigns the instant they receive official approval. They freely admit they will only be able to vaccinate 1.5 million people (Germany) and 500,000 people (France) in January. Germany has a population of 84 million, France 65 million. Italy didn’t expect to really get going until the end of January, but the EU is now pushing for an earlier symbolic kickoff date to be applied simultaneously in all member states. More EU inconsistence, alas: will Germany and France need to hold off so Italy can catch up and all can board the train together? Stay tuned.

All Italy can count on for now is 11 million doses from Moderna and 27 million from Pfizer.

Italy reserved 200 million vaccine doses in 2021, for a population of 60 million, and the overshoot turns out to be fortunate, since 40 percent of the doses were supposed to come from AstraZeneca (with its Italian connection) and Sanofi, both of whose work is now in doubt. All Italy can count on for now is 11 million doses from Moderna and 27 million from Pfizer, enough to cover only 19 million people (the vaccine is a two-shot process). If, however, the single-dose Johnson & Johnson vaccine performs well that should do the trick (54 million promised doses). But if the two-dose method turns out to be preferable, Italy will have to fall back on its 30 million doses from CureVac, assuming that company’s Phase 3 trial results pan out.

Finally, a word on the big picture. Some 75 percent of all vaccine doses in 2021 are already spoken for, and Thailand is atop no one’s list. Regulation will be strict, except apparently in Australia, where cash will be sufficient to secure a place at the front of the line.

Despite the World Health Organization’s best efforts and the generosity of the Chinese, only 10 percent of people living in developing countries are likely to be vaccinated next year.