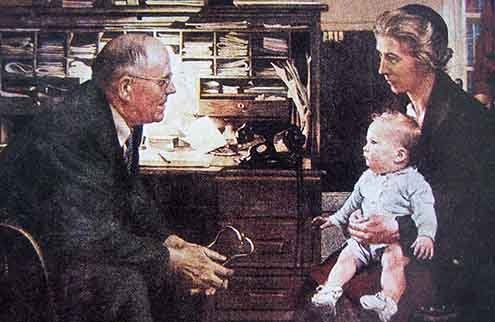 Being a doctor is about listening, and practice.
I

nfants amaze me. From birth, when they can do little else but suckle, they learn to roll over, sit, stand, grab objects, and babble, among other things — all this over the course of a few months. They hit scores of developmental milestones between tumbling out of the birth canal and reaching their first birthday.

Medical school feels a lot like that period of infancy. The numbers of “firsts” in my own first year have been too many to count. It’s all part of a building block process, accumulating knowledge and skill that eventually culminates in becoming a physician.

The most significant milestones, of course, involve patient contact. When you go to your doctor, chances are the questions he or she asks flow naturally. That’s certainly been the case for me with my own doctor. But while the questions flow flawlessly from an experienced practitioner, the medical interview is a thoughtful, highly meticulous process. Each question has a specific purpose. Each is designed to glean information to either support or counter a potential diagnosis evolving in the physician’s head.

Thankfully, as medical students we work up to that gradually. First semester, we began by practicing the elements of the medical interview with our fellow medical students in safe, small group settings. Using scenarios in which one medical student would play patient and the other doctor, we learned to elicit the chief complaint, or the patient’s main problem — chest pain, for example.

The second element is the HPI, which stands for “history of present illness.” You want to know everything about the problem at hand. Things like how long it’s been going on, whether it’s happened before, where it happens, associated symptoms, if anything makes it better or worse, and, if it’s a matter of pain, the quality and severity of it. You then need to know the past medical and surgical history, medications, and medication allergies.

This sounds simple, but it can get tricky quickly, particularly for patients hospitalized with a host of complex health issues they may or may not understand themselves.

Another important but potentially daunting element of the medical interview is social history. In it, you first ask benign questions about occupation, education, and living situation. But you also need to know about tobacco, alcohol, and drug use — and specifics, how many packs or drinks or hits a day, not just “yes” or “no.” These are touchy subjects for many people. Even touchier is sexual history. Questions such as: Sexually active? Just in the marriage, or outside it, too? Men, women, or both? Contraception? What about any history of sexually transmitted infections?

These inquiries, while seeming invasive, are all-important indicators of risk factors. An accurate family history is also vital, because it provides clues about the risk of heart attack, stroke, cancer, and diabetes.

The last part of the medical interview is the ROS, the “review of systems.” In it, you ask what seems like a laundry list of screening questions about every bodily system. This is intended to help you hone in on any other medical problems going on.

By the end of our first semester, we started taking histories of real patients. I will never forget my first patient interview in the hospital setting. My mentor took me up to one of the floors and asked a nurse if there was a friendly patient I could talk to. She led us to a lounge area where a man was sitting, chatting with his family. I learned that he’d been in the hospital for several days after his blood sugar skyrocketed to life-threatening levels. But he’d recovered and was about to be discharged. I asked question after question, trying my best not to fumble, repeat myself, or pause for too long trying to think of what to ask next. Everyone’s willingness to talk to me was humbling.

At one point, another nurse came up, looked at me, and challenged, “Who are you?”

I froze. “Um, I’m a medical student here to take a history,” I told her, with as much confidence as I could muster.

“Oh, okay,” she muttered and walked away.

I was amazed — my medical student status, indicated by my short, white coat and the name badge clipped to the collar, gave me access to people, places, and things few people ever see. Dressed this way, I belonged here, no questions asked.

That belonging became even more evident as we transitioned during our second semester into taking not only the medical history, but also doing partial physical exams in the hospital. After taking a full history of a patient, the goal was to take vital signs, then examine the neck, back, lungs, heart, abdomen, and extremities. Looking at that list, it might seem simple. But trying to remember all of the maneuvers in each category, and the most efficient order — so that you aren’t asking the patient to change positions back and forth — is a feat. Not to mention that as a naïve examiner, I have little sense of what normal — forget abnormal — is.

One part of the abdominal exam, for example, is to listen for bowel sounds with your stethoscope. You roughly divide the patient’s abdomen into four quadrants, and listen in each quadrant for the gurgling sounds of the intestines. The hope is that the patient has “normal bowel sounds in all four quadrants.” Abnormal would be “hypoactive” (insufficient gurgling) or “hyperactive” (excess gurgling). Either of these could potentially suggest a problem.

But it’s quite subjective. Gurgling is hard to quantify. I’ve done a grand total of four physical exams on hospital patients, which is clearly not enough to get a sense of normal or abnormal intestinal activity. There’s only one solution: practice.

When I get frustrated, practice is the word I think of most. I need more listening, more touching, and more talking. The introduction to patients marks the beginning of the transition from academics to apprenticeship. Academic ability is one thing, obtaining a medical history and listening for a heart murmur is something else again.

It’s like being a baby again, not able to do much of anything. You learn by observing the grown-ups around you, and by the gradual development of your own brain and body. It’s scary, because you fall a lot. But it’s also exciting, because when you go from sitting to standing, you get a whole new view of the world.