Prelude to a vote 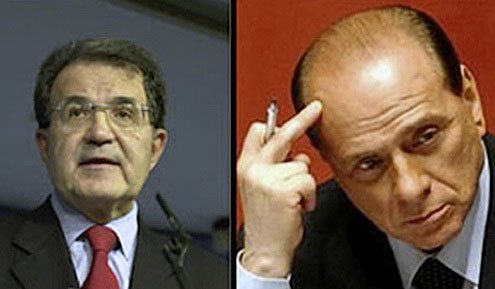 The race between Romano Prodi and incumbent Prime Minister Silvio Berlusconi is likely to be close.
I

t’s a campaign filled with testosterone and neurotoxins. On one side, the prime minister, sensing trouble, follows invective wherever it leads him. Idiot Communists, he warns, are eager to extinguish life as euro-challenged, zero-growth Italians know it. For Silvio Berlusconi, the Italian Left is a crack house of lunatics banded together for a single score — this weekend’s national elections.

On the other side, the placid but insidiously capricious professor hedges his bets. He confronts a megalomaniac, says Romano Prodi, conscious that a subdural side of Italy still falls for demagogues. He cannot “loud-out” the loudest so he instead plays sniper, shooting when the opportunity presents itself, not always accurately.

While it’s immensely appealing to mock Berlusconi’s cackling insults and hand-me-down gaffes, vainglory revels in such mockery. “It’s difficult,” former White House advisor David Gergen once remarked about dealing with an American president on a daily basis, “to speak truth to power.” In Italy, few ever do. In recent weeks, Berlusconi has increasingly resembled an old-style boss — a capo in time-honored terms. He has done this at a time when profligate self-indulgence seems out of style and synch. But Berlusconi refuses to emerge from the yes-man universe he has coiffed to protect his realm. He is a skilled Narcissus as potentially framed by Fellini, a walking cliché who bemoans the strict rules of television debate because those who do not answer to him imposed them.

Berlusconi’s ferret-like agitation during his two televised encounters with Prodi on RAI reflected the anxiety of a caged superior forced to adhere briefly, and miserably, to rules imposed by lesser men and women.

The fact that much of the drama is inherently strategic — intended to attract audiences that follow variety and reality television — doesn’t change its visceral and pre-literate view of the electorate: That people are deaf to egotism so long as they get affecting drama and soap opera characters. If popes use repetition to make their point, Italian prime ministers employ a tourist bromide on their home turf: When in doubt, shout.

But Berlusconi’s behavior doesn’t exist in a vacuum: It is a counterweight designed to dismantle the superior airs of his opponents.

Prodi is an astute bureaucrat and teacher who hang-glides over specifics. He is caring and colorless, just the kind of technocrat Berlusconi might dispatch to a junior ministry or simply dismiss. Prodi also heads a Leftist alliance with a demoralizing track record of power struggles. It includes hard Leftists (a minority), trade unionists, and ex-Communists, all of who seemed variously ill at ease and uncharacteristically self-important when running Italy in the mid- and late-1990s.

His gross antics are aimed intentionally at non-intellectual Italians. Undecided voters, he reasons, are more likely to pick a thunderously self-centered man over a weak Leftist academic, which is how Prodi has long been portrayed.

Gianfranco Fini, Berlusconi’s ambitious ally on the Right and the foreign minister, has suffered the strategy reluctantly, perhaps calculating that his Alleanza Nazionale (reformed neo-Fascists) might pick up votes from disaffected Berlusconi supporters. If the smaller AN gains significantly at the expense of Berlusconi’s Forza Italia, Fini’s stock in coalition-building would improve notably. Though Fini has repeatedly defended Berlusconi’s right to “emphasize” strategic points, he’s seemed occasionally abashed by the florid rhetoric. He’s not alone. In February, Confindustria chief Luca di Montezemolo (who once headed Ferrari and belonged to the Agnelli “household”) called the election campaign the most poisonous since the end of World War II.

Berlusconi, who built his campaign on redbaiting, is the source of the venom. By refusing to curb his appetite for linking dissenters to Communist sympathies (much the way U.S. foreign policy in the Vietnam 1960s embraced the Domino Theory), Berlusconi endangered rational debate. He was assisted in the enterprise by Fausto Bertinotti, the eloquent but permanently outraged leader of Italy’s Rifondazione Comunista, which arose from the ashes of the Cold War party.

Berlusconi’s own resentments, nearly paranoid at times, are based on a deeply personal view of recent Italian history. A young 69 (facelifts included), he arrived from nowhere to build a media and sports empire in the 1980s and early 90s. Well-connected, he transformed his business success into a populist miracle (Forza Italia) and ascended improbably to the prime minister’s spot in 1994. But leftover scandals from the Clean Hands probes tainted him and his government collapsed in less than a year. The exit was humiliating. A political elephant, Berlusconi established the source of his miseries as Leftist-leaning magistrates from the north, whom he blamed for leading ideologically motivated crusades to single him out and sabotage his career. Few will argue that the Italian judiciary has favored the Left in recent decades; but even fewer will dispute that Berlusconi’s business holdings and political ambitions left him open to a fierce mix of envy and persuasive allegations of conflict of interest.

Berlusconi gradually revived Forza Italia, finding bedfellows in the reformed Fascist right and among motivated northern secessionists seeking a voice in Rome. He rode this unlikely troika (with the limping Christian centrists) back to power in 2001. Chastened by 1994 and emboldened by Left-loathing allies, he vowed to meet fire with fire. Leftist attacks regarding alleged abuses of power he would rationalize as Communist plots. Communist prosecutors and judges, he said, were out to get him. In fairness, he has never wavered from the assertion. His confrontational philosophy charged the atmosphere with negative ions but cast him as a virtuous cartoon character that survives explosions charred but feisty.

It’s still too soon to tell if Berlusconi’s bellowing will cost him votes, and even the prime minister’s spot. What is fairly certain, however, is that the next coalition government — of the left or right — will not serve out its full five-year term. The election should be close enough to cause government-building dilemmas on both sides, though Berlusconi’s woes may ultimately be greater.

Italy has a history of short-lived governments and Berlusconi’s remarkable stretch can be attributed in part to the aftereffects of September 11. Between 2001 and 2003, Italians along with other European citizenries were shocked into immobility. Berlusconi immediately sided with President George W. Bush, a brilliant opening gambit that turned sour to some — Communists, says Berlusconi — when Iraq was invaded. Spain repudiated its pro-Bush government two years ago.

But Italy is not Spain. It remains slow-to-change, cunning to its own detriment, and divided North to South.

While Prodi’s progressive Left is an odd mixture of intellectuals and blue collar workers — in the steadily vanishing tradition of New Deal American liberalism — Berlusconi’s feigns a dapper Archie Bunker ready to seize on real and imagined enemies while championing a less tangible Italian version of family values. The truth, though, is that Berlusconi came to his success through Italy’s enduring old boy network. His most durable support is concentrated in places where power (whether wielded by the Roman Catholic Church or the United States) commands respect and deference. He taps the roots of Italy’s intricate inferiority complex by linking himself to American policies, suggesting that European ones are still ill formed. According to Berlusconi, the European Union (Prodi’s most recent employer; he headed the EU Commission) is swelled with rabble-rousing Socialists. To the detriment of his health (a recurring theme), he offers himself to his admirers as the Knight Templar who unselfishly worked to repair a half-a-decade of center-left mismanagement. To please the Roman Catholic Church, he embraces the outlines of Natural Law.

All of which plays well where success is defined by getting ahead without compromising with the ideologically tainted — which the Left is in Italy. In Berlusconi, it can identify a pro-Christian, anti-Communist crusader of the kind it never had in the 1970s, when so-called Eurocommunism rose to challenge center and right. At the time, Communist-haters had only waffling Christian Democrats and an array of brilliantly irrelevant subaltern parties.

Berlusconi undeniably has filled the void. He is, billions aside, an assertive, reactionary voice that represents singleness of purpose.

Is such a reactionary void-filler as appropriate in 2006 as it was five years ago?

Does a wealthy Citizen Kane who loves America and doesn’t believe conflict of interest applies to him the kind of leader Italy wishes to again embrace as the West nears the start of its third post-Cold War decade? Is his Italian self-help manual still relevant?

The Left, an improbably glued together Humpty Dumpty coalition led by a Humpty Dumpty-like man in Prodi, insists Berlusconi has outdated himself. He’s dead, it says, but doesn’t know it yet.

To which Berlusconi responds with his trademark burnished grin.

Power doesn’t date or die, he says. Power merely is.

Which means he is, and is as he wishes to be, until proven otherwise.