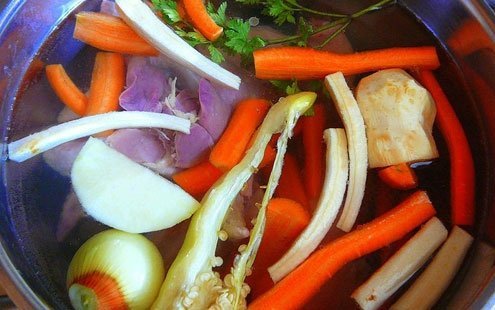 Broth is a fundamental ingredient in any cooking.
A

While these foodstuffs and appliances boost a restaurant kitchen, what matters most is how they help ensure the presence of a necessary friend: broth.

In the restaurant where I apprentice, the chef gets the broth going as soon as he walks in. He fills a large pot with water and scrounges around for candidates. His stock usually consists of white onions (peel and all), carrots, celery stalks (with leaves), a few tomatoes, and parsley stems (if they’re being chopped that morning).

This simple liquid simmers away all morning long on low heat (boiling makes the vegetables fall apart) and at one point or another serves everyone in the kitchen. When lunch service begins he adds shrimp shells and the heads and spines of any white-fleshed fish he has handy, turning the mild vegetable texture into a more complex, multi-layered seafood broth.

Broth makes its presence known from start to finish in a meal. For appetizers, fish meatballs are drizzled with it before being whisked away to hungry diners. It’s also the key to many fish-based pastas, as almost all of them get a healthy spoonful. Even main courses, particularly baked fish, get a splash to prevent their drying out in the oven.

Before my professional experience, broth meant little to me. I remembered it from Thanksgiving, when my dad spent the day before hovering over the boiling turkey innards he used to make part of his gravy. Other than that, if a recipe called for stock I just heated some water and tossed in a bouillon cube.

No more cubes for me. A few quick steps and you can have your own fresh broth that makes mincemeat out of the taste produced by salty dissolved cubes.

A quick vegetable broth requires only about three minutes of prep work and 45 minutes of cooking (you don’t even need to be around for the latter). A standard combination is carrots, celery and onions (equal parts of each), but just about anything that strikes your fancy will work – tomatoes, parsley, leeks, chives, pea pods. Be wary of few ingredients with flavors that can dominate instead of blending in. Basil is one, artichoke another, and garlic is no surprise.

Once you’ve decided on your ingredients, cut them up into small pieces — shape isn’t particularly important. The greater the surface area, the faster the process, so strips are better than cubes. Toss them in a pot of water on medium-low heat.

Leave that to simmer, uncovered, for the requisite 45 minutes and you’ve got fresh broth. If you want a more specific flavor profile you can refine your ingredient selection.

Try pea pods and yellow onions as the base for a spring pea soup. Or asparagus stalks for pasta with wild asparagus tips and Parmesan.

In the same time frame as the veggie version you can make a fish broth by tossing in a fish head or two, or the shells from various crustaceans and following the same directions above.

Again, in terms of time, remember that after the prep work you’re free to go off and do other things while the pot simmers.

Making chicken broth is also reasonably simple. Use the vegetable model. Carved chicken carcass leftovers or a few wings and legs make for a hearty mix. Toss them in and let the broth cook for between two to three hours.

The jump to meat broths is the big one. Extracting the full flavor from cow bones is more time-consuming than chicken, but the finished process is well worth the effort. Homemade veal stock can turn a capable home cook into a real gourmet. It brings a deeper depth of flavor to any meat dish.

My meat broth recipe takes about 12 hours, and so I’d recommend making a very large batch and saving it. If you reduce the broth and pour it into ice-cube trays, stick it in the freezer, you can just pop out a cube or two as needed for the next few months.

Next time you make a ragù, add a cube or two of your veal stock and you’ll notice an amazing difference.