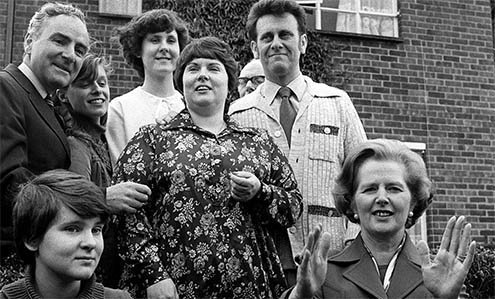 Margaret Thatcher (lower right), by aggressively encouarging renters to buy, was largely responsible for dismantling the bulk of the British social welfare system.
I

just came back from visiting my daughter in London. She told me that for decades many low-income London newlyweds qualified for so-called council flats, low-rent public housing funded by local government. The cheap flats gave young couples a home and eventually encouraged the idea that by earning steady wages they might save enough to buy a place of their own.

Until the building of council flat ended in 1980, London rents were generally low. Landlords tended to maintain upkeep and worked to keep costs down in what was then a competitive market.

Then came Margaret Thatcher and her hatchet. She aggressively encouraged the buying and selling of these rental flats. It took her little more than a decade, the 1980s, to dismantle a social welfare system that had given both individuals and families a sense of stability. In 1979, 42 percent of Britons lived in rented council housing. In 2015 the figure was eight percent.

Nowadays in London, the equivalent of €2,000 gets you a one-year contract on a run-down, moldy two-bedroom flat in a seedy area. Many of these apartments come with a 40-year-old rug, an insect zoo, and families of mice. When the contract runs out, landlords can evict you or raise the rent at will. Knowing this, do you really want to complain about the mice? British job security isn’t much better. And it’s not just Britain.

Italy is also busy eliminating its own social safety net by dismantling job security laws set up in the 1960s and 1970s after years of labor unrest. Workers must now either earn off-the-books cash, in nero, or get a so-called partita IVA, or taxpayer ID, which basically means they’ll be paying for their own “pension” plan in 40 years.

My daughter has a pointed perspective on the change. She insists so-called precarious labor is making workers extremely compliant, and not just on the job. When the stakes are so high, no one wants to rock the boat professionally or personally, let alone politically. They just accept the status quo.

I know people in Italy who already work hours of unpaid overtime weekly but are terrified of requests from their bosses because they worry about being fired. The message may be oblique, but they get it. In the end, they figure a bad job is better than no job at all.

At a political level, many are afraid that if they ask for more — for paid overtime, reasonable health care, pensions, good schools, parental leave, reasonable pay, elderly care, and so on — they’ll likely face some other penalty, such as higher taxes (forgetting that taxes could be, and used to be, far more graduated than they are now).

As a psychologist, the theory of induced precariousness rings a bell with me.

In 2013, psychotherapist Dan Shaw, a former member of the Siddha Yoga movement, wrote a book called “Traumatic Narcissism: Relational Systems of Subjugation,” which despite the academic title is a highly readable study not only of how people come under the influence of a cult but also about oppressive families, disturbed couple relationships, and they way institutes and organizations of various kinds can exert influence over an individual.

Shaw’s views are appropriate because precariousness is a primary tool for cults, narcissistic parents, narcissistic partners, and other kinds of human managers. They use it to control and manipulate people into a sort of dream world in which they believe the story they’re being told about how life works and feel there’s no way out. And the story hinges on compliance.

If a parent habitually withholds affection, a child will do anything necessary to get this affection. The child will consider himself “bad” and surrender his own desires to please the parent. He does this because he feels his place in the parent’s heart is precarious.

In cults, people are brought into a world where they’re prevented from having relationships outside of it. Their lives come to depend on a charismatic cult leader who first charms them, then viciously criticizes them, so that they fear losing everything.

Is that so much different from the workplace of a difficult economy in which people are subjected to constant requests for more with the unspoken threat that they could easily be replaced? Or from a housing market in which renters are never sure they won’t be evicted and have to move further and further away from work? Or from a heavy tax burden on those who barely have enough already. Or from worries by asking for more help from their government, they’ll just face an even deeper burden?

Why are people so compliant? My sense is that it’s not an accident.